Matthew Goldman of Ericsson Elected as the Next SMPTE President 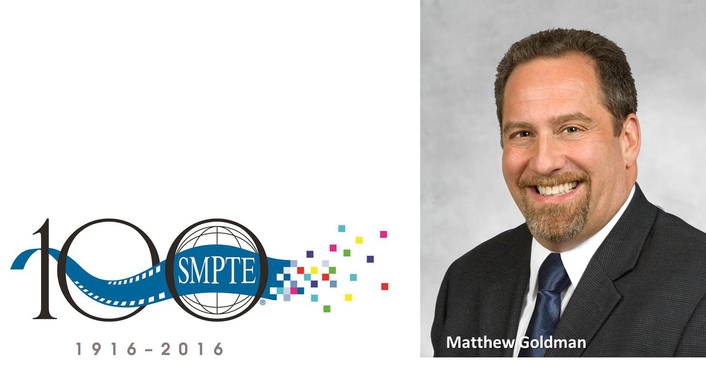 The Society of Motion Picture and Television Engineers® (SMPTE®), the organization whose standards work has supported a century of technological advances in entertainment technology, today announced that the Membership has elected new officers and governors for the 2017-2018 term. Matthew Goldman, senior vice president of technology, TV and media at Ericsson, will take office as the new SMPTE president on Jan. 1, 2017.

"Matthew has held a variety of key SMPTE roles that have furthered the Society's mission, and I am confident that as the new SMPTE President, he will build on Bob Seidel's excellent work," said SMPTE Past President Wendy Aylsworth, who served as the chair of the Society Nominating Committee. "Matthew and Bob are among the many SMPTE Members who have worked to bolster the Society's growth leading into and during our Centennial celebrations. The officers and governors elected for the 2017-2018 term — and those who continue in their existing roles — are a broad and strong group who bring extraordinary leadership to SMPTE as we enter our second century of ensuring interoperability across the media ecosystem and, in turn, facilitating the ongoing growth of our industry."

Goldman, a SMPTE Fellow who has previously held SMPTE board roles including executive vice president, finance vice president, and Eastern Region Governor, will serve a two-year term as SMPTE president. He succeeds outgoing President Robert Seidel, vice president of engineering and advanced technology at CBS, who will continue to serve on the SMPTE Board of Governors as the Society's past president.

"The influx of IP into broadcasting, the embrace of software-defined networking and processing, and the rise of a fully-connected world are just a few examples of the extraordinary evolution taking place across the media and entertainment industry," said Goldman. "SMPTE has been working diligently to address the industry's growth and to provide standards and education programs that are relevant — in concept and practice — to the current and future work of its engineers, creatives, and other professionals. I look forward to this new opportunity, as SMPTE president, to contribute to this important work and to help guide the Society toward ever-greater growth, stability, and success." 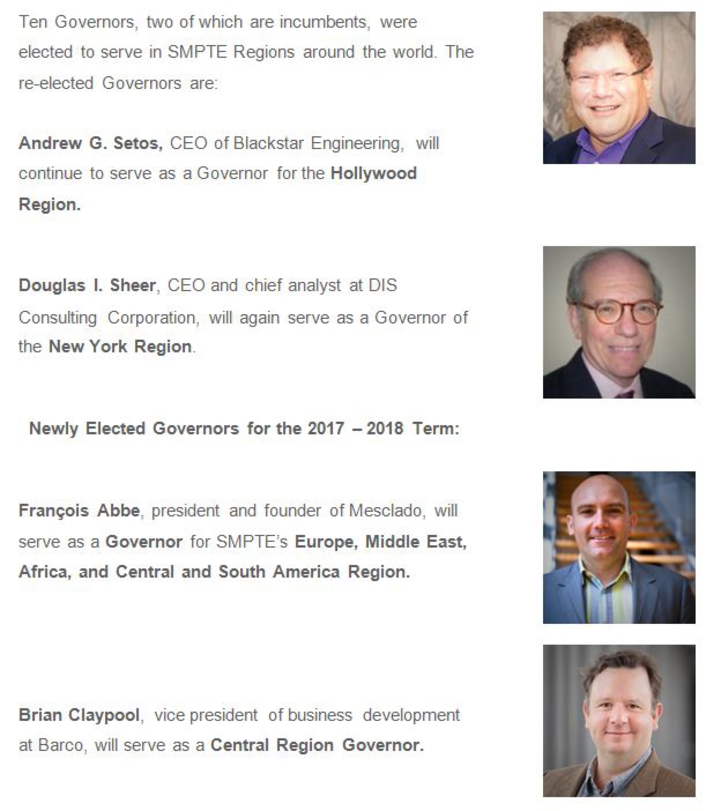 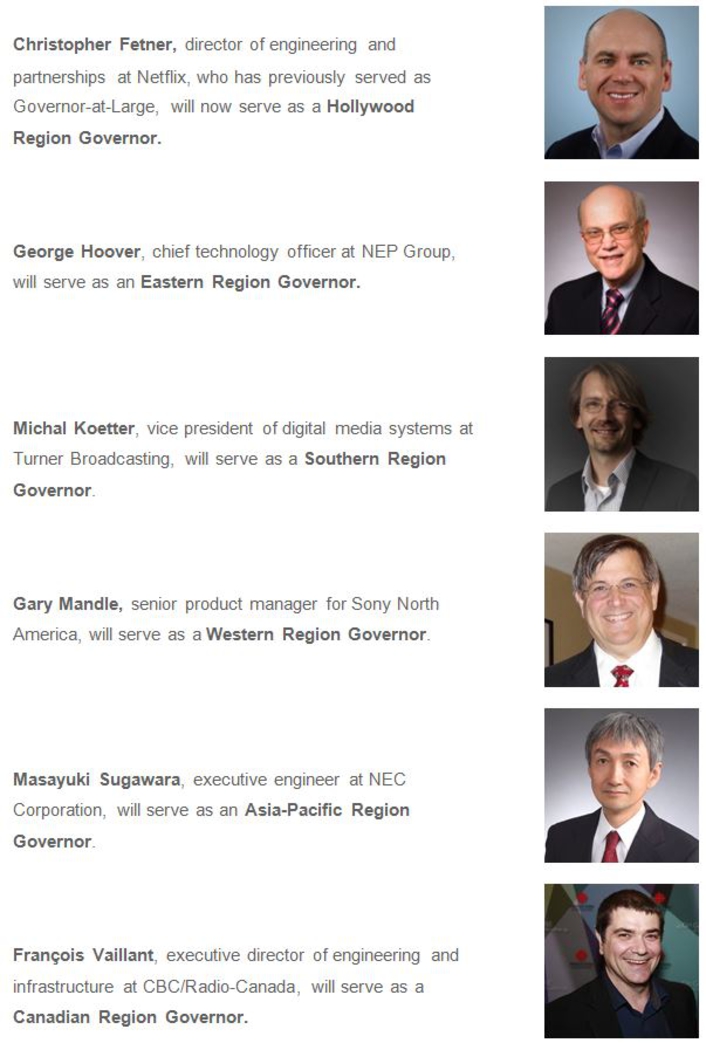 Newly elected officers and governors will be introduced to the SMPTE membership at the Society's Annual General Membership Meeting, which takes place in Salon One of the Ray Dolby Ballroom at the Hollywood and Highland Center in Los Angeles, on Tuesday, Oct. 25 at 5:30 p.m., in conjunction with the SMPTE 2016 Annual Technical Conference & Exhibition (SMPTE 2016). The SMPTE 2016 Welcome Reception will immediately follow in the Ray Dolby Exhibit Hall. Both the Annual General Membership Meeting and Welcome Reception are open to all attendees of SMPTE 2016, including those with exhibits-only passes.

Further details and registration are available at www.smpte2016.org.

Governors-at-Large and directors of standards, education, and membership will be appointed by the Board of Governors at a later date. Further information about SMPTE leadership is available at www.smpte.org/board.

About the Society of Motion Picture and Television Engineers® (SMPTE®)
For the past 100 years, the people of the Society of Motion Pictures and Television Engineers (SMPTE, pronounced "simp-tee") have sorted out the details of many significant advances in entertainment technology, from the introduction of "talkies" and color television to HD and UHD (4K, 8K) TV. Since its founding in 1916, the Society has earned an Oscar® and multiple Emmy® Awards for its work in advancing moving-imagery education and engineering across the communications, technology, media, and entertainment industries. The Society has developed thousands of standards, recommended practices, and engineering guidelines, more than 800 of which are currently in force.

SMPTE's global membership today includes 7,000 members, who are motion-imaging executives, engineers, creative and technology professionals, researchers, scientists, educators, and students. A partnership with the Hollywood Professional Association (HPA®) connects SMPTE and its membership with the professional community of businesses and individuals who provide the expertise, support, tools, and infrastructure for the creation and finishing of motion pictures, television programs, commercials, digital media, and other dynamic media content.