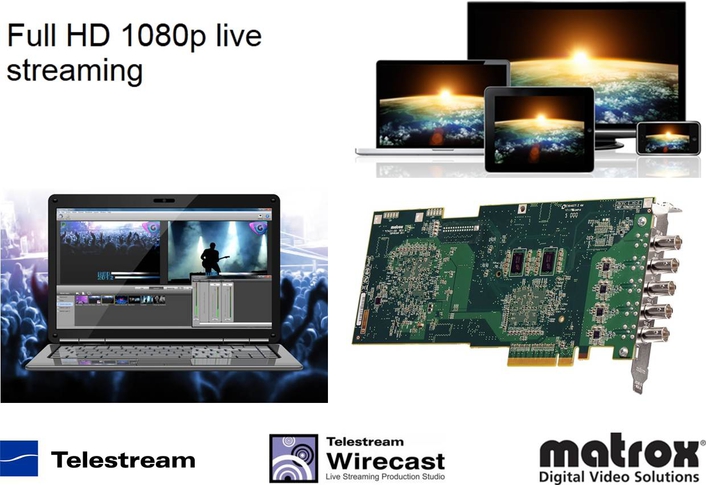 Matrox announced that the Matrox® VS4™  four-channel HD capture card for use with Telestream® Wirecast® for Windows webcasting software is now available worldwide. In a single PCIe slot, Matrox VS4 provides up to four independent HD-SDI inputs with up to 8 embedded audio channels per SDI source. Matrox VS4 not only sends video feeds to Wirecast for streaming, it simultaneously provides ISO recording of all the original video and audio feeds to disk – ready for post-event editing.

"A key feature that many Wirecast users have asked for is ISO capture,” said Filippa Hasselstrom, Wirecast product manager at Telestream. “Now that feature is a reality, only with Matrox VS4. We’re excited to bring this turnkey system to sports groups, churches, schools, and other live event producers."

The turnkey solutions offer a number key user benefits. In addition to capturing and sending four video feeds to Wirecast for live streaming, Matrox VS4 simultaneously records the original high-quality video feeds to disk for post-event editing. Wirecast allows users to stream video at resolutions up to 1080p HD and save productions to disk for on-demand distribution in a choice of web-friendly formats, including QuickTime H.264, Windows Media, or Flash. Audio/video sync and support for up to eight embedded audio channels per input are also included.

Users can easily set up Wirecast with leading streaming platforms and CDNs - such as YouTube, Ustream, and Twitch - and simultaneously stream to multiple destinations in a choice of resolutions and bandwidths. In addition to streaming live video anywhere, users can display the video locally on an external monitor, such as an in-house projector or other display system.

Price and availability Priced at $1,495 US (€1295, £995) not including local taxes and delivery, Matrox VS4 is now available through a worldwide network of authorized dealers. Full turnkey HD streaming production systems are available from some certified systems builders starting at under $5000.

About Telestream
Telestream provides world-class live and on-demand digital video tools and workflow solutions that allow consumers and businesses to transform video on the desktop and across the enterprise. Many of the world's most demanding media and entertainment companies as well as a growing number of users in a broad range of business environments, rely on Telestream products to streamline operations, reach broader audiences and generate more revenue from their media. Telestream products span the entire digital media lifecycle, including video capture and ingest; live and on-demand encoding and transcoding; playout, delivery, and live streaming; as well as management and automation of the entire workflow. Telestream corporate headquarters are located in Nevada City, California. The company is privately held. For more information, visit www.telestream.net.