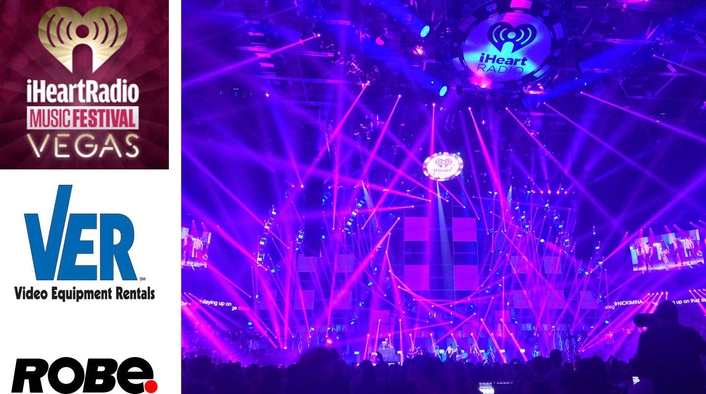 .
Tom Kenny specified over 500 Robe moving lights for the immensely popular 2014 iHeartRadio Music Festival, staged in the 15,000 capacity Ballroom of the MGM Grand in Las Vegas for two consecutive days.

With a glittering line up of stars – Coldplay, Taylor Swift, Usher, Nicki Minaj, One Direction, Ed Sheeran, Calvin Harris, Bastille and many, many more including some show-stopping collaborations, the high profile spectacle was hosted by Ryan Seacrest and broadcast live on over 150 iHeartMedia radio stations across the country.

It was also video streamed live over the internet reaching an estimated 2.5 billion additional viewers … with edited highlights aired as a special two night exclusive on the US’s CW network a week later. 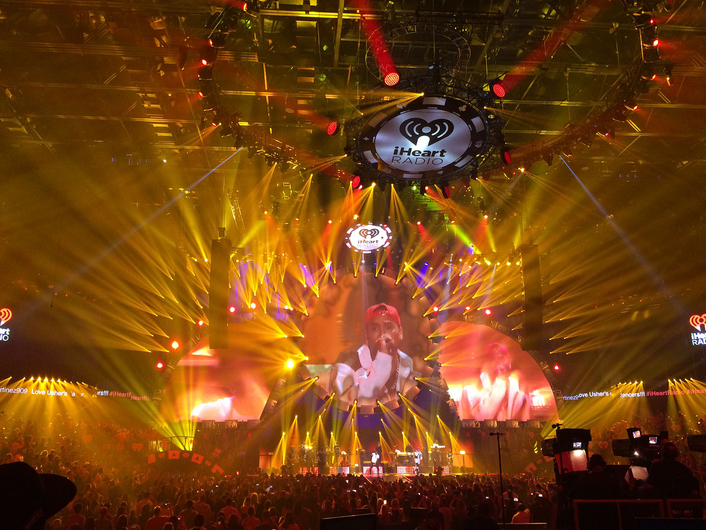 It was the first year that Kenny was available to create a production lighting design for the event, for which he also designed the set based on classic and contemporary spheres with multi-layered video surfaces at the back. He worked closely with Video Designer Jason Rudolph and Scenic Designer Tom McPhillips, Darren Pfeiffer for iHeartMedia and Dan Parise for DPS Productions.

They wanted an epic ‘live arena TV’ look to the show, explained Kenny, an aesthetic that he has honed to a fine art in addition to his signature vibrancy. 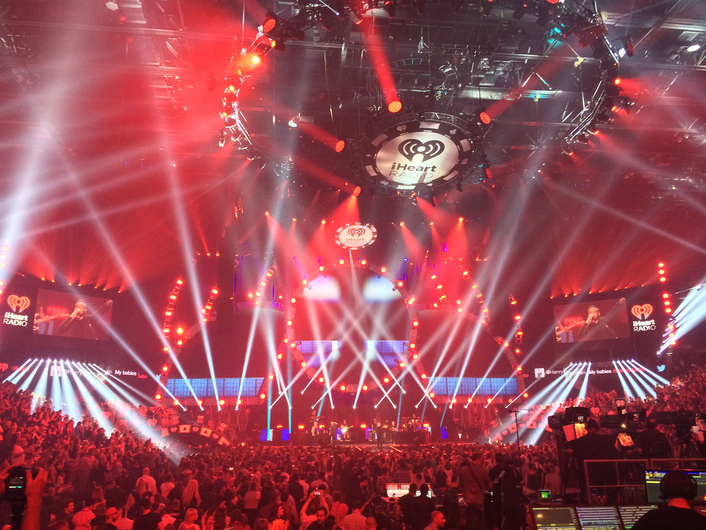 As well as making things look fabulous, the producers also wanted him on-board because of his high profile rock ‘n’ roll background and reputation for thinking on his feet, satisfying the demands of multiple artists simultaneously, improvising when needed … and retaining his famous Irish humour!

“It was a hugely exciting project on which to work,” he enthused “Very fast moving and energy-pumping, and the lighting had to take on that same look and vibe, and that’s why I chose a rig that was primarily Robe!”

“I knew with over 300 Pointes I would have all the dynamics and flexibility I needed to get through the very intense programming schedule” - 12 bands a day performing five songs each. Each one had to look different and effectively have their own individual show – even though they were all sharing the same rig.

He used the 300 Pointes – dotted all over the network of trussing and set pieces – to create the main backbone of looks for all their sets. 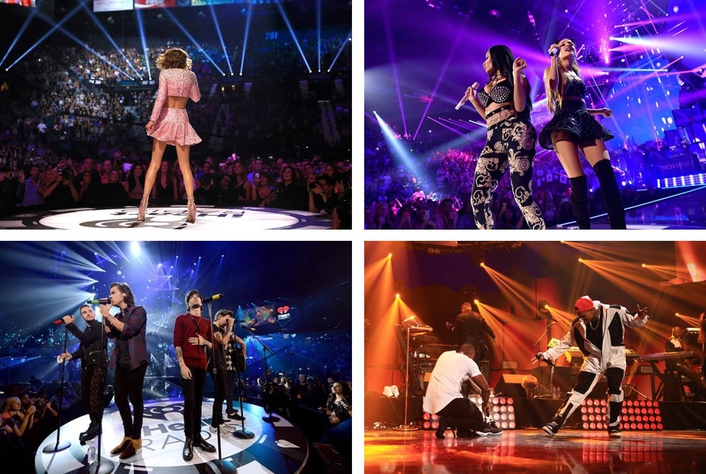 “The Pointes were absolutely stunning. They offered so much variety that absolutely no scene looked the same and I still had plenty of headroom … by no means had we run out of great looking combinations by the end of the two full-on days!”

In addition to the Pointes, over 100 LEDWash 1200s graced the rig, used for general stage and set washing duties in an array of fabulous colours, 66 x LEDBeam 100s were utilized for specials together with 24 of Robe’s brand new BMFL Spots. 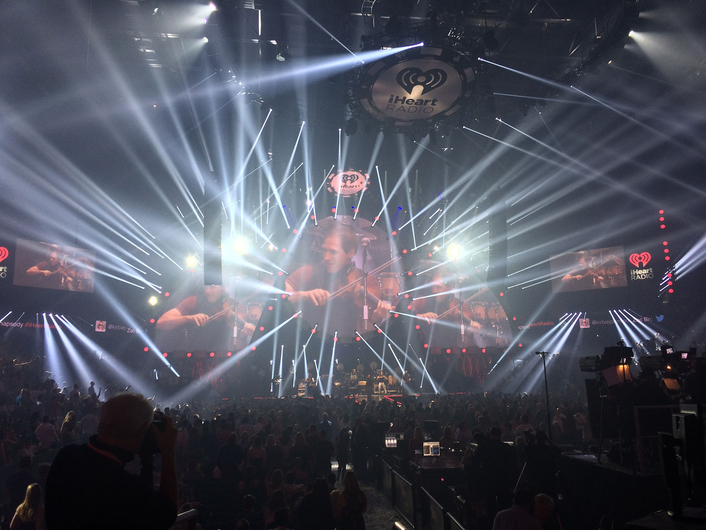 Kenny was the very first LD to use BMFL Spots in the US on the 2014 Teen Choice Awards in Los Angeles. Having realised their massive potential on that project, he now had more time to optimise their features and with it, their role and prominence in this show.

Sixteen BMFLs were high up on the overhead trusses, proving invaluable for creating massive looks that reached right out across the audience to the back of the venue. The other eight on the floor made powerful and dramatic low-level specials upstage of the bands. “They were so bright that I had to keep turning them down!” he exclaimed laughing. “The BMFLs are so incredibly versatile that it seemed like there were loads more fixtures on the rig.” 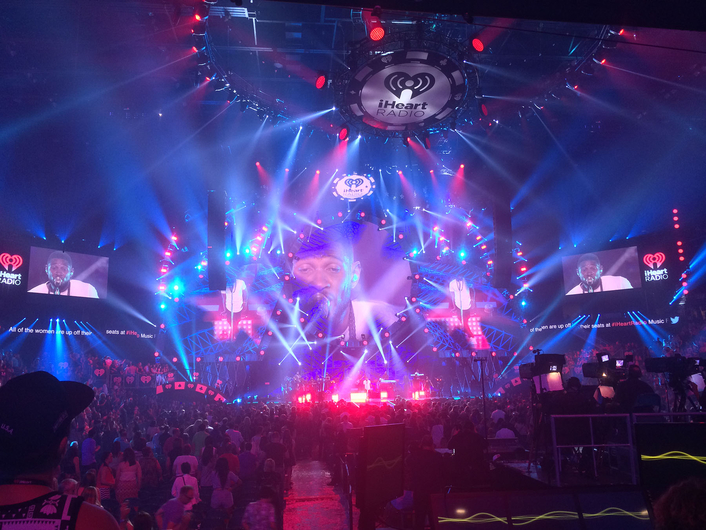 “Some great teamwork and synergy between all of us in the various technical / creative departments helped produce a beautiful show – full of life, color and emotion – of which we are all very proud,” commented Kenny, adding that the client was also delighted with the results.

The gaffers were Bryan Klunder and Mike Grimes, the artist’s video was coordinated by Chase Simonds and all lighting and video equipment was supplied by VER.