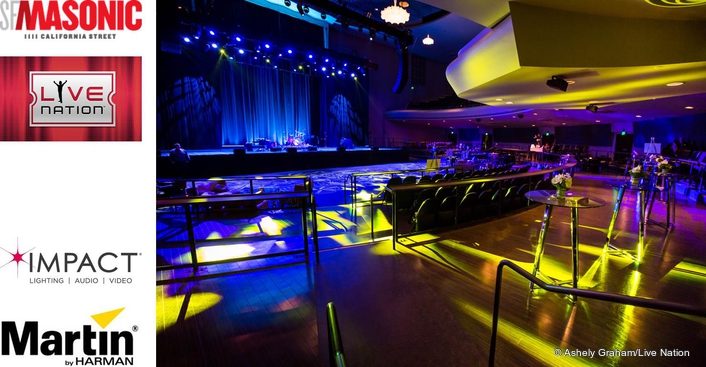 Intelligent LED System From Impact Lighting and HARMAN’s Martin Professional
The Masonic has been a landmark in San Francisco since opening in 1958 and is now operated by concert promotion company, Live Nation. The venue recently underwent a massive renovation that included the addition of a new concert stage, luxury VIP boxes and flexible, tiered open floor space for both general admission and seated shows—which brought capacity to 3,300. Among the several major enhancements unveiled, The Masonic now features a new stage lighting system with more than 45 of HARMAN’s Martin Professional MAC Viper and MAC Aura fixtures.

Developed by San Francisco-based Impact Lighting, which began working with Martin Professional in 2003, the new lighting design was tailored specifically for the flexibility of the new space to ensure optimal lighting for every event held at the venue.

“Live Nation initially requested a state-of-the-art lighting system,” said Kim Martin, Sales and Marketing Manager, Impact Lighting. “So at the time of the proposal we felt the challenge was to convince the client that to truly be innovative they should move to intelligent lighting and LED fixtures.”

Live Nation, however, was ready: The new operators were so impressed by the intelligent LED system proposed by Impact Lighting that the installation began almost immediately. The design features eight MAC Viper Profiles and eight MAC Viper Wash lights across two 50-foot trusses (four of each fixture per truss) above the main stage for effect lighting, backed by 16 MAC Aura wash lights (eight per truss). Impact also installed five MAC Viper Performances on a front stage truss along with 12 MAC Auras for front wash. The system is DMX-controllable and programmable through the house console. 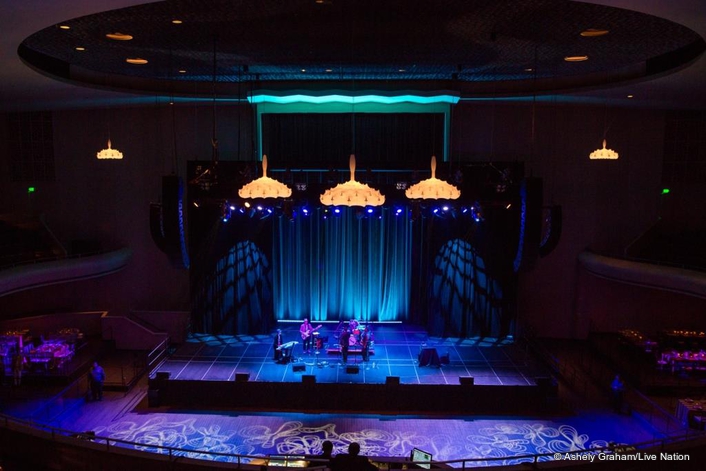 “We’ve been working with Martin for more than a decade,” said Kim Martin. “We have the Martin Vipers and Auras in our production rental inventory so it made sense for us to install them at The Masonic from a fixture knowledge and support perspective. The Vipers are phenomenal fixtures from the zoom to the gobo selection. The optics are truly superb with a bright beam and a CMY color mixing system that produces consistent color from lens to target.”

Kim Martin said, Impact lighting has continued to rely on Martin Professional because of its unique ability to consistently produce equipment that sets industry standards. “You can not please everyone, but to become an industry standard you’ve got to offer enough features that designers want at a price production houses can afford,” she said. “Martin has done this incredibly well and as a result it’s possible to travel around the country and have your equipment needs fulfilled. Even for our own house-designed productions, we may need to add inventory to complete a large event so it’s important to have a company like Martin whose gear you can find and rent at other production houses no matter where you are.”

As a world leader in the creation of dynamic lighting solutions for the entertainment, architectural and commercial sectors, Martin lighting and video systems are renowned the world over. Martin also offers a range of advanced lighting controllers and media servers, as well as a complete line of smoke machines as a complement to intelligent lighting. Martin operates the industry’s most complete and capable distributor network with local partners in nearly 100 countries. Founded in 1987 and based in Aarhus, Denmark, Martin is the lighting division of global infotainment and audio company HARMAN International Industries.