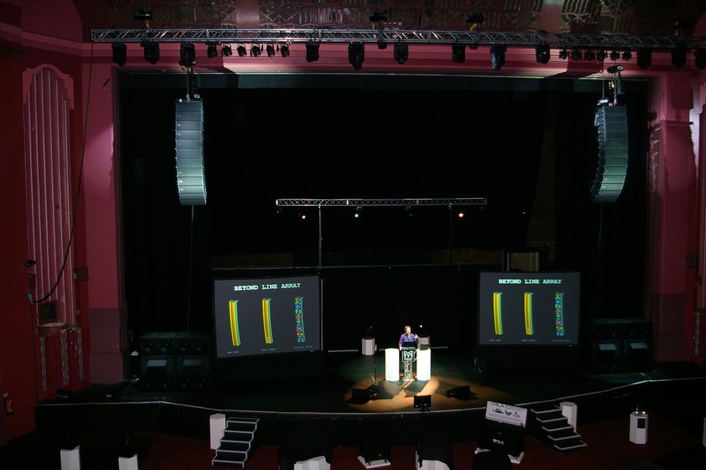 The feedback received over the four sessions — which drew visitors from as far afield as North America — was overwhelming.

Managing director, Anthony Taylor, in his opening speech referred to the 900 original MLA systems now out in the field, stating that the release of a Compact version was an inevitable consequence.

“We have been working on this really for the last 14 months and we are very excited by the concept.

“It has all the attributes of the original MLA — it is an incredibly powerful system, and the fact that it is scalable will put us into all kinds of different areas. The Compact is particularly well suited for installation projects as well as side fills for the MLA and venues up to 5,000 seats.”

He added, “I think the market expected us to go to a smaller box with the same characteristics, and this is really just the start of how we will deploy this technology.”

R&D director, Jason Baird, provided an in-depth presentation of the system before the two hangs of 12 elements that were rigged for the occasion were spectacularly revealed (along with stacked DSX subs) — courtesy of the excellent production support provided by corporate event specialists, USS.

Leading FOH engineer Trevor Gilligan mixed the show on both days, with Dave Bigg babysitting on the opening day, and Martin Audio’s Nigel Meddemmen on Day 2.

Reference tracks were used to demonstrate different optimisations — including spoken word (Hitchhikers Guide To The Galaxy), Jennifer Warnes’ Somebody, Somewhere and a blast of Rammstein. 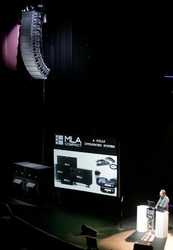 Guests were then invited to walk the room — including up to the Circle — to experience the consistency of the cellular control, as well as to the back of the stage, behind the hangs, where the sound levels were impressively quiet.

Director of sales, Simon Bull, summed up the fantastic reaction to the launch. “Everyone was extremely impressed, not only with how professional the presentation and demonstration were, but with the quality of the sound system itself. The exercise achieved everything we wanted and more.”