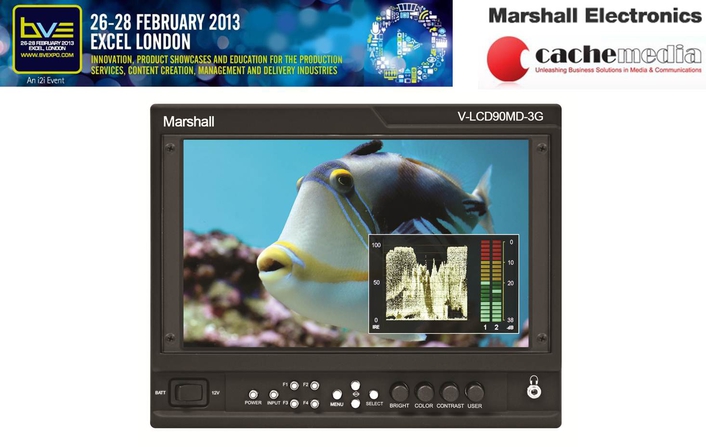 .
The new series of Marshall LED backlit camera top/field monitors will be on show at BVE 2013 in London on stand K10. These monitors are being selected and used by DP’s and professional DSLR users alike to provide a reliable reference for critical focus and exposure as well as colorimetry and framing, on camera or off, in the field or in the studio.

European Distributor Cache-Media’s Managing Director Stuart Cameron said: “A good field or camera top monitor is worth its weight in gold whatever programme or style you are shooting. The DSLR revolution has pushed video camera manufacturers to large format sensors, and as a result focus and exposure have become absolutely crucial factors in producing the stunning results which are now possible with these cameras. ‘Almost in focus’ is a non starter in the HD world. The significant numbers we are now selling reflect the success of the Marshall design and the price point.”

UK based DP Den Lennie, who has worked in the industry for over 20 years and runs a film school at fstopacademy.com, said in his review of the 9 inch version: “I'm a fan of this monitor. It's sharp, accurate, modular and lightweight. It packs a lot of punch and is totally reliable when judging exposure on set. Moreover the colour accuracy is spot on, something that is not as common as you might think when working with video monitors.”

The monitors as standard have an HDCP-compliant HDMI input with loop through output, with an optional modular function giving a choice of additional in/out configurations of 3G HD-SDI.

The monitors are high brightness (600 nit), high resolution,  lightweight,  practical, and designed to be easy to use. The wealth of features include an icon driven menu system, a video waveform display with stereo audio level bar and front panel headphone output.

A pixel to pixel function enables the user to preset a section of the picture from the camera to fill the screen on demand via one of the function buttons as an aid to critical focus, along with the excellent Marshall peaking facility now with a choice of four colours.

Cache-Media can deliver from stock. The complete package includes a polycarbonate screen protector and a choice of battery mount, including V-Lock.

About Cache Media
Established in 2002, with 10 years experience of supplying video and audio monitoring solutions to high profile customers such as MTV, the BBC and Arena Television, Cache Media supplies a variety of premium quality products, including 360 Systems Transmission Products, SD and HD servers, HARDATA .TV CIAB Playout Servers, Marshall Broadcast Monitors and Doremi Labs equipment including 3D Converters, Digital Cinema servers and presentation servers.
Cache Media works closely with the manufacturers to ensure that good value for money solutions/products are developed for the European market. Providing good support and aftercare is at the heart of the company philosophy. Cache Media is based in Newbury, UK with full test, support, warehousing and office facilities.

About Marshall
For almost 30 years Marshall Electronics has specialised in the development and  manufacture of advanced technology products for the broadcast and professional AV sector. Based in El Segundo,  California, they operate manufacturing facilities in the US, China, Japan, Korea and Russia, along with an R&D Centre in Portland, Oregon.
The Broadcast/Multimedia Division continues to sustain significant growth, and Marshall continues to gain recognition as the leading manufacturer of LCD rack mountable monitors in the world.