New Impression X4's Form Unique Festoon
Marc Janowitz, long time lighting and production designer for Kentucky psychedelic rock band My Morning Jacket, has kept up his tradition of using the evolving series of GLP impression LED heads by specifying 50 of the latest impression X4’s on the band’s recent US tour.

The LD admits to having been a fan of the GLP impression since the first impression 90 and later the 120RZ zoom. But he says that by embracing new technology, the X4 provides a higher level of functionality entirely.

Incorporating 19 quad colour RGBW LED’s, each rated at 15 Watts, in a breakthrough design, the X4 offers a single homogenised colour output from its unique looking front lens across a wide colour spectrum and with high output. Janowitz could immediately see how he could put this featureset, with its impressive 7:1 (7°-50°) zoom ratio, to good use.

Given a free hand with the band’s lighting he admits, “There is a tremendous amount of mutual trust — but I have a pretty good sense of the type of visual landscape they are comfortable performing within.”

In fact he had originally been planning to put the 120RZ into the new MMJ design until coming across GLP’s latest solution by accident … and in the nick of time. “By chance, my associate, Ben Price, was prepping another one of our shows [also serviced by VER of Glendale] when [GLP Inc president] Mark Ravenhill stopped by to show him the X4 back in May. I was in Europe and Ben called me in the middle of the night to tell me about the fixture — he was so excited that he forgot about the time difference.”

The timing was perfect as Marc Janowitz was in the process of finalising the set design with the MMJ crew. “We managed to get the new fixture into the discussions just in time for everything to fall into place.”

On returning from Europe Marc got to review the fixture at close quarters. “I could see right away what the potential was and didn’t need to compare the X4 with other washlights.  I needed to see that they were at least as bright and feature packed as previous impression fixtures and no bigger or heavier. 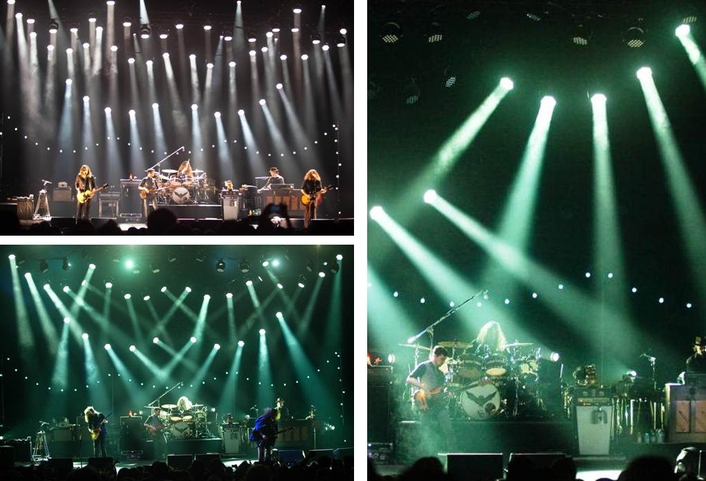 “Seeing the addition of the white LED and how it created an even better option for high transmission pastel colors — plus the overall homogenised output sold me immediately.  No more looking at red/green pixels when mixing ambers and oranges!”

The creative element is designed around a festoon-like hanging system, fabricated out of a modified truss ladder, which forms the architectural centrepiece.  These consist of ten soft, swooped hanging positions suspended between the trusses in the overhead grid, with five of the X4’s on each.  These festoons travel pre-rigged and cabled, and once the grid is hung, are fully deployed in about 10 minutes.

Marc describes the new X4’s as “bright, lightweight, diverse” and the zoom as “remarkable.” He qualifies this by saying, “It enables me to use these fixtures for an overhead beamy washlight plus a groundrow cyc light … the zoom is outstanding.”

One particular feature that is working well within the MMJ design is the macro effects channel.  “I utilise the centre cluster only and point all the fixtures out to the audience.  Since the architectural structure of the design was meant to emulate strings of festoon lights, I was able to create the look of bare bulbs hanging over the stage with the X4.  I would go to this look during the set break and then stay in it for the first few songs out of the encore (typically ballads or solo acoustic songs).”

Speaking of the impression footprint in general Marc relates, “since many of my clients require designs that will tour well in restricted logistical situations, such as bus trailers, and rock clubs, the combination of minimum size, weight and power consumption is perfect.  But they also pack an excellent punch. “These are not just club fixtures — they hold their own just as well at 30ft trim as they do at 12ft.”

The lighting designer has already underpinned his commitment to the new fixture by promptly deploying a further 28 X4’s in a different context on the Autumn tour with Trey Anastasio Band. “I imagine I’ll be logging quite a few ‘lamp-hours’ on this line and its offshoots in the coming months … so it’s a good thing they are LED!” he smiles.