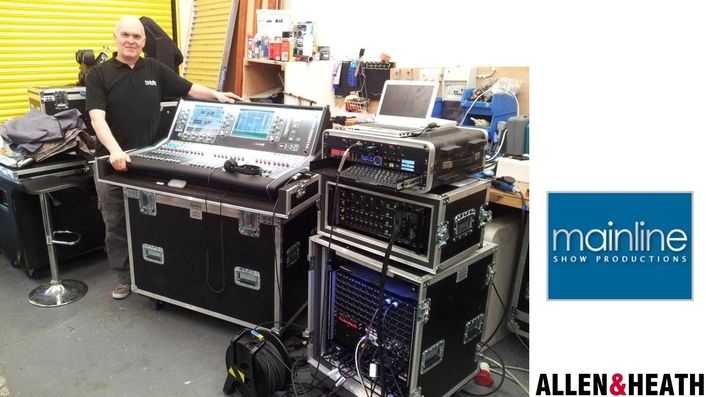 Manchester-based event supply company Mainline Show Productions has recently invested in an Allen & Heath dLive digital mixing system for its hire stock. The dLive S5000 surface with DM48 MixRack and DX32 Expander (fitted with analogue and digital inputs and outputs) have already had their first outings with Mainline clients and the company is set to also take delivery of a further S3000 surface and DM32 MixRack.

Supplied by Wigwam (one of Audio-Technica’s network of dLive specialist resellers), the dLive system was chosen both for its feature set and usability, as Mainline’s Rob Lorton explains, “We were early adopters of Allen & Heath’s iLive T series, recognising its power and features were unbeatable for the price at that time. Clearly, dLive has been built and developed from those principles - it's a great mixing system with a top sound and flexibility. Again, this system is superb for the price.

“We love the 'doubling' of features since iLive, such as 64 mix channels, 16 rack effects, more responsive, granular level metering on channel strips and so on. The user interface is excellent, particularly the touchscreens and I/O matrix. Being able to zoom in and click to set things is great - I also like to be able to zoom right out to see an overview of settings easily - it saves having to delve through menus to check individual I/O numbers.

“We believe dLive will be a game-changer in UK live sound and the investment in the systems should future-proof our sound desk stock for several years. We're also looking forward to how dLive will evolve with new feature releases, as iLive did.”

Commenting on Mainline’s first dLive S5000 and DM48 hire outing – for a theatre show with Pink Floyd tribute act Manc Floyd – Rob said, “We spent a good few days in a pre-production virtual soundcheck to get familiar with the desk. We used multi-track recordings from a previous gig on a Dante playback. By the time we arrived at the venue, we'd built up a reasonable mix and good confidence with the desk. 32 input channels were used, including playback at FOH. Six monitor mixes were also controlled from FOH. All vocal channels were 'digitally split' onto separate inputs for monitors. Compression could then be used on the main mix vocals without affecting monitors, avoiding feedback pitfalls.

“This was band sound engineer Craig Adams' first digital desk experience, but he took to dLive very quickly at handover. Mainline were on hand throughout for any desk queries. dLive was rock solid throughout and the band were really happy.”