Sir Elton John made a guest appearance with Ed Sheeran at Wembley, where Major Tom used their Optocore system

With a leading roster of artists on its books — and one of its long-term charges Ed Sheeran recently undertaking a stadium tour — UK-based rental company Major Tom Ltd was eager to keep its digital audio systems constantly evolving. “We had been looking at investing in an Optocore system for a while, admits Major Tom’s Andy Banks.  “We have been massive DiGiCo users since they started out, and as such have always used the Optocore products within the DiGiCo set up.”

But recently the company purchased their own independent system, comprising multiple X6R and V3R converters with Mic In, Line Out and AES boards. Banks explained that this was a co-ordinated move from both analogue and AES copper to fibre: “We knew it would make FOH runs smaller and lighter and give greater efficiencies, with the requirement for far greater channel capacity over far less cable.”

The purchase, which gives them separate V3R and X6R stand-alone systems, can thus be deployed as conventional returns racks while giving the option to combine the systems and run larger delay rings as the site demands.

Although the system debuted on a UFC Fight Night Andy Banks confirms that the Optocore system was always purchased with the Ed Sheeran dates in mind, where Optocore was used to distribute audio from Meyer Sound Galileo Callisto 616 array processors.

He explains, “With UFC being an ‘in the round’ style event we could simply have two tiny fibres running from the venue roof grid and take all audio, with minimum impact on sight-lines.

“On the other hand, the Wembley shows with Ed Sheeran were a major challenge, especially as we were using a system design that had never been tried in the venue before; however, it was a massive success, offering improved coverage for the upper seats.  This wouldn’t have been possible without the longer cable runs we can now use over a fibre network, and it made set up and control of the system really simple! 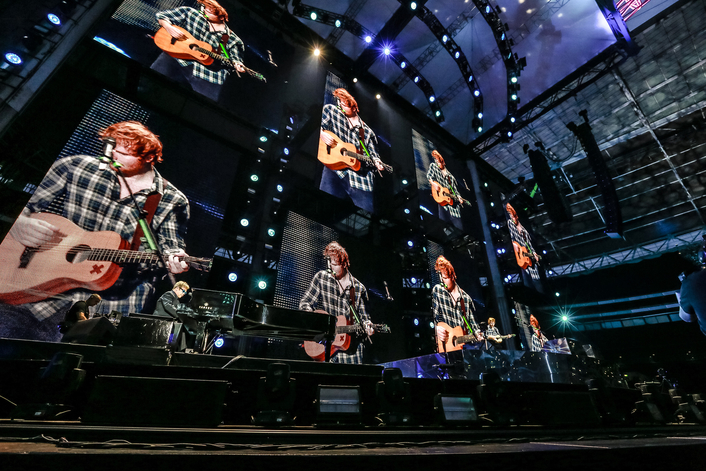 “It means that in stadiums we can easily run one small optical cable to our delay positions hundreds of meters away with no signal loss and have data control to all of those positions over the same single cable. The Optocore system is not only lighter and more compact to run but the fact that it is scalable to each job is also a massive benefit.”

Andy Banks is pleased to report that the Optocore system was also given the thumbs-up by Sheeran’s technical team. “The system worked faultlessly and with transparent audio quality,” he said.  “Head of audio, Charlie Albin, system engineers, Dave White and Malcolm Giles, FOH engineer and production manager, Chris Marsh, all really appreciated the ability to run such long cable runs without having to worry about signal loss or cable paths.

“In any case, they already run their whole stage on an Optocore loop with the DiGiCo SD racks for all input and outputs as well.”

Optocore supported the sale with a full day’s training in the control software and potential usage, administered by Applications Engineering Manager, Maciek Janiszewski.

Going forward Andy Banks sees plenty of opportunity for future deployment of the Optocore system — not only on their regular UFC events, but also with other regular acts, including Judas Priest, who will be touring over the coming months and other exciting projects still under wraps.