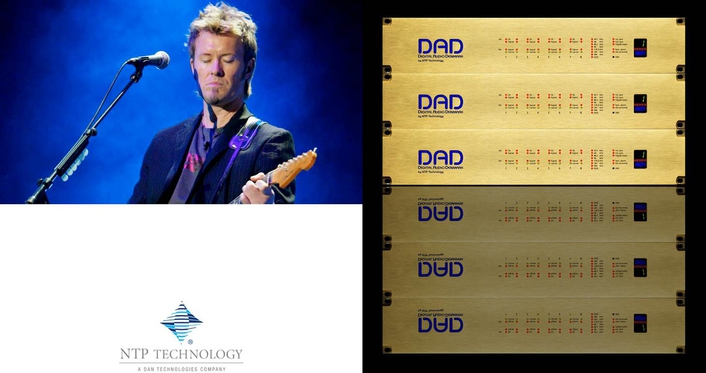 Designed for high quality music recording as well as mastering and monitoring in Digital eXtreme Definition and Direct Stream
Magne Furuholmen, one of Scandinavia's most popular and successful musicians, has invested in his third NTP DAD AX24 audio signal processor. Guitarist, keyboardist, singer and songwriter, he was a founder member of the A-ha group in 1982 and later of Timbersound.

Magne Furuholmen has co-written many of A-ha's hits, including 'Stay On These Roads', 'Manhattan Skyline', and the band's biggest hit 'Take on Me'. When A-ha went into hiatus in 1994, he worked on many other music projects in film and theatre. The band reconvened in 2000 and remained active until 2010.

Furuholmen is also a visual artist, working in a variety of media including painting, graphics and sculpture. He was commissioned in 2001 to design an official Norwegian postage stamp, and in 2007 he created a monumental sculpture in recycled materials for the Nobel Peace Center in Oslo, which was inaugurated by Al Gore. Furuholmen has permanent works on display in institutions and in public spaces, including a gigantic 5 metre glazed ceramic jar sculpture and fountain in the city-centre of Bergen. He is founder of, and performer in, the working artist-collective Apparatjik together with fellow music colleagues Guy Berryman of Coldplay and Jonas Bjerre of the Danish band Mew. Apparatjik is a platform for projects in the gap between music-world and art-world activities.

"We bought our first DAD AX24 systems in summer 2011 for recording and post-production in our Oslo studio," Furuholmen comments. "They feed into an Apple Mac workstation running Avid Pro Tools. We were absolutely thrilled by the transparent and natural sound quality of the AX24. My engineer found it hard to believe the recording could so closely match the experience of hearing the live performance. The third AX24 is being used for recording live stage performances on location. It is configured with eight high-specification mike preamps which make the system ideal for capturing a wide dynamic range. In my book, it is the best solution around today."

"Electrically-amplified instruments sound better when recorded acoustically rather than by direct injection as the mikes pick up a lot of ambient reverberation which create richer harmonics," adds Furuholmen's engineering colleague Tor Einar Krogtoft-Jensen. "The AX24 conveys bass, mid-range and high-frequency detail in vocals and acoustic instruments with great realism. We have played the results to engineers and fellow musicians, and all have been greatly impressed by the AX24's audio clarity."

Designed for high quality music recording as well as mastering and monitoring in Digital eXtreme Definition (DXD) and Direct Stream Digital (DSD), the NTP DAD AX24 offers A/D and D/A conversion in PCM at up to 384 kHz sampling rate, and DSD at 64 frame/s or 128 frame/s. The optional microphone preamplifier incorporates analogue gain control in 3 dB steps as well as digital gain control with 0.25 dB precision. Dynamic range is between 118 and 121 dB. The preamplifier's equivalent noise floor is -130 dB.