MAC Viper Profile™ Around the World with Luis Miguel 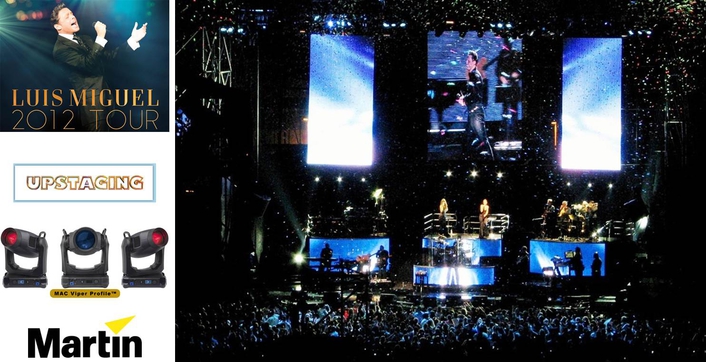 Lighting and show designer is Dave Maxwell who was shown the 1000 W profile fixture by John Huddleston of Upstaging a few weeks prior to production rehearsals.

“John suggested that we swap out some of the 1200 W profiles, which were mounted underneath the existing video, with Vipers,” Dave explains. “What struck me immediately were two areas. First, how white and bright the fixture is and secondly the range of very nice gobos it has on board. I love the mixes you can get from these.”

The Viper Profile’s all new gobo artwork from two 5-slot rotating gobo wheels plus an FX wheel with 4 gobos and 135° animation effect give designers an array of fresh graphics to work with. “I also like the soft start from stop to moving on the animation,” Dave says.

The MAC Viper Profile is the first fixture in Martin’s 1000 W MAC Viper family of automated luminaires. It is quickly finding a spot on riders across the touring industry thanks to 26,000 lumens of power that make it brighter and more efficient than 1200 W fixtures with a smaller form and lower weight. It won an Award for Innovation at the recent PLASA trade show in London where it was hailed as “a new benchmark for automated lighting spots."