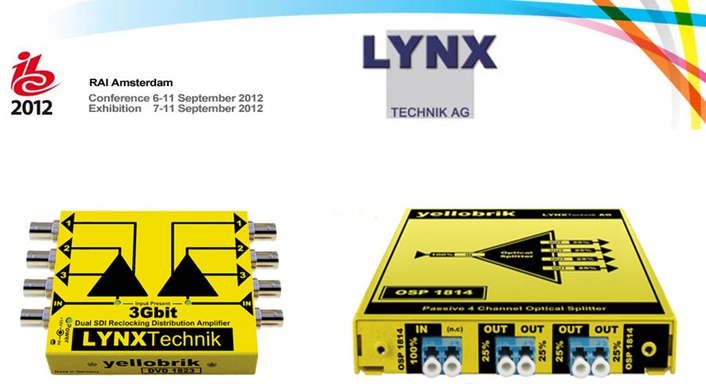 The new yellobrik DVD 1823 reclocking DA provides distribution of any SDI signal from 270Mbit/s to 2.97Gbit/s including DVB-ASI signals.

The compact yellobrik DVD 1823 dual-channel reclocking DA is a general purpose distribution amplifier that is ideal for a number of broadcast distribution applications including those where space is at a premium.

The DVD 1823 comes standard with a 3-year warranty, power supply and plastic transport case.  It can be pre-ordered now and will be available for shipment in September, 2012.

Due to the versatility of the new yellobrik splitters, typical applications of use are vast.  For example, they can be used when a broadcast or production facility requires links other than point-to-point links or any fiber application where signal copies are required.

The yellobrik fiber optic splitters are fully passive, meaning they require no power and operate at wavelengths 1260nm - 1650nm.

The three yellobrik fiber optic splitters will be available for shipment in September, 2012.

About LYNX Technik
LYNX Technik AG is an industry leader and technology provider of modular interface solutions for broadcast and professional use. LYNX Technik AG is an independent privately owned company with its headquarters, research and manufacturing facilities based in Weiterstadt, Germany. Sales and Support is covered through secondary distribution channels managed from its headquarters in Germany, USA (California), and Asia (Singapore).