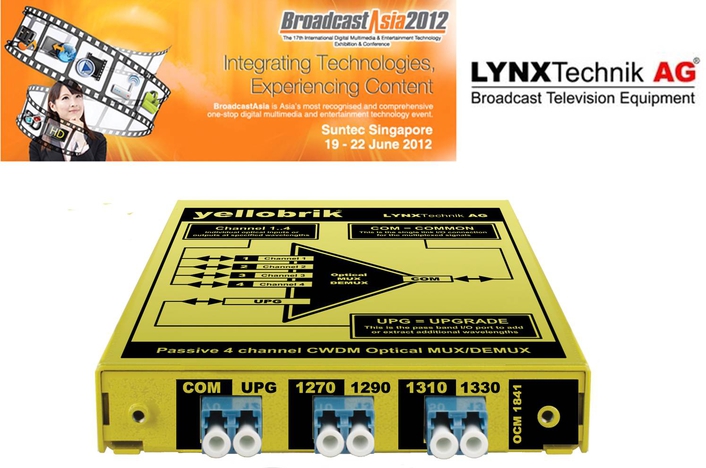 Converters:
The award-winning CHD 1812 - HDMI to SDI Converter + Frame Sync is one of the yellobrik's being highlighted at Broadcast Asia. With this brick, facilities can convert HDMI to HD or SD-SDI such as sources coming from broadcast video cameras as well as PC and MAC computers. A key feature of this yellobrik is the built-in frame synchronizer, which eliminates the need to purchase a separate and expensive 3Gbit frame sync unit. It is an ideal solution for any application that requires a fully synchronized SDI input from an external asynchronous HDMI source. The optional single-mode SDI fiber output ensures that the transition to fiber is simple and makes these units ideal for long distance SDI transmission of HD content.

The CDH 1811 SDI to HDMI Converter will also be on display. The CDH 1811 includes a unique on-screen overlay mode that displays a multitude of additional information about the connected signal including: SDI input format and bit depth, burn-in windows for DVITC,VITC and LTC time code, 16 channel on- screen audio metering, closed caption presence indication and AFD,WSS and VI metadata presence. This overlay feature turns the CDH 1811 SDI to HDMI converter is a fully featured SDI monitoring tool.

CWDM Multiplexers / De-Multiplexers:
Also to be showcased on the LYNX Technik Broadcast Asia booth will be the new line of yellobrik CWDM multiplexers and de-multiplexers; OCM 1841, 1842, 1843, 1844.   The devices accept, combine, transmit and receive up to four fiber optic signals over a single link allowing several signals to share a single fiber optic link. A single unit can perform multiplexer as well as demultiplexer functions. The four multiplexers support various Coarse Wavelength Division Multiplexing (CWDM) wavelengths from 1270 nm to 1610 nm. Each model has four channels that are each assigned to a different wavelength.

All four yellobriks feature an optical UPG port which facilitates cascading the four modules together for a total of up to 16 channels. The modules can be used standalone or integrated into a 19" rack using a rack tray option, which is ideal for system installations.

LYNX Technik will be at Broadcast Asia booth 4F2-03.

About LYNX Technik:
LYNX Technik AG is an industry leader and technology provider of signal processing solutions for broadcast and professional use. LYNX Technik AG is an independent privately owned company with its headquarters, research and manufacturing facilities based in Weiterstadt, Germany. Sales and Support is covered through secondary distribution channels managed from its headquarters in Germany, Singapore, and the USA.