He confirmed, “We began promoting the Vi3000 as soon as the first pictures were up in cyberspace and immediately received a number of inquiries. Henrik was one of the first people we approached.”

The momentum grew further during the presentation at this year’s Prolight+Sound Show in Frankfurt, and having taken delivery of its own demo console, LydRommet’s participation at local promo events, supported by HARMAN Professional’s Dom Harter and Dave Karlsen, further spread the word.

Both Lars Christenesen and Henrik Kjærgaard—a vastly experienced sound engineer in his own right—say there is much to commend the first of Soundcraft’s new console, pinpointing the Dante/ MADI interfaces for recording/plugins; 96 mix channels; 24 stereo or/mono busses; the built in local rack; the high-quality local mic pre’s; the additional screen and control for the price; the 36 faders, and in particular “the fantastic audio quality.” 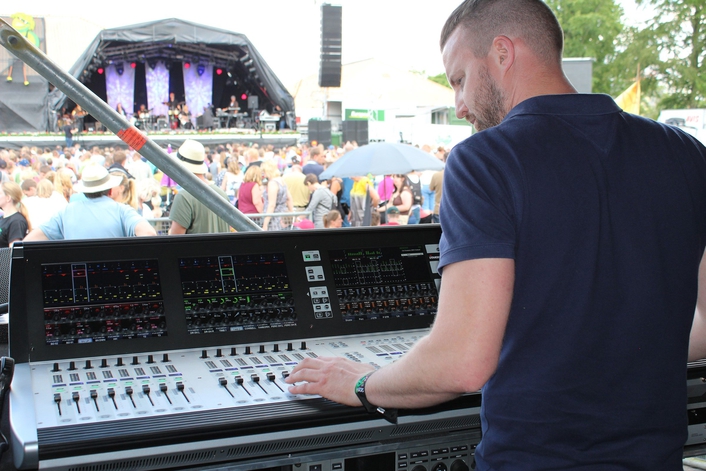 Kenneth Isen of Lydvæsenet, mixing FOH for Lis Sorensen at the Soelund Festival on 11th June

“Most of our customers just say ‘wow’ and can’t believe what they are getting for the money,” continued Christensen. “The Vi3000 is certainly introducing the Vi quality to a broader range of productions.”

Lydvæsenet is no stranger to the Soundcraft platform and already has a number of Si Expressions, Si Performers and a Vi1 in its inventory. “All were chosen because of the audio quality, facilities and ease of use,” confirmed Kjærgaard.

There were several reasons for the latest purchase, he said. “The main reason was the I/O capacity of the Vi3000, which we needed to take on certain tour productions. But all the other cool features like onboard MADI/Dante, UA plugins, upgraded DSP and graphics certainly helped to make the decision.”

The first tour of duty for the Vi3000 was with Lis Sorensen, an evergreen Danish pop artist at the Jelling Musik festival.

In summary, Lars Christensen stated, “We are proud to count Henrik as one of the most enthusiastic users of Soundcraft’s entire range of digital consoles. He needed the enhanced capacity that the Vi3000 could offer—and the RealTime Rack and access to UA plugins certainly didn’t hinder the decision!”

Speaking generally, he believes the Vi3000 would make a perfect partner for every sound engineer and rental company. “Unofficially, the Vi’s are the preferred digital consoles for a festival stage—and this will be enhanced with the Vi3000 with all its facilities, integration with the UA RealTime rack and the overall price point.”

He also noted that trends in live mixing are changing, and audio quality and ease of use are again taking top priority. “We believe people are reverting from mixing on screens to mixing on their ears, so consoles with the most direct access and control will gain market share, and those based on menus will decline,” he predicted.