First high profile deployment at On Blackheath Festival
Having become the first UK investor in Martin Audio’s MLA Mini system, London Speaker Hire (LSH) — the AV rental division of The Hive Partnership — has underlined its commitment to the award-winning platform by purchasing an MLA Compact system.

The company has added 16 MLA Compact enclosures to its inventory and pressed the system straight into service on the inaugural On Blackheath Festival, featuring Massive Attack, and promoted by Harvey Goldsmith.

With 25,000 people descending on Blackheath Common in south-east London, with its three stages, there was a strong desire to keep the sound away from local residential properties. According to LSH director, Grant Turner, the promoters were well aware of the extraordinary control capabilities of MLA’s Multi-cellular Array control technology, having witnessed events at Hyde Park for AEG Live, where for noise pollution reasons the license had previously been in jeopardy.

“Initially we didn’t have the kind of projects that warranted MLA Compact, and MLA Mini was perfect for our requirements,” he explained. “But increasingly this started coming up on riders. We had always said, after we saw the system at last year’s PLASA Show that we didn’t want to buy a piece of hardware but invest in a new brand.”

At the Blackheath event, billed as a ‘Food and Music Festival’, and run in partnership with John Lewis, LSH provided infrastructure for the 600-capacity ‘Village’ tent — featuring Chris Holland All Star Band and Jarvis Cocker (deejaying). They ran five MLA Compacts per side and four WS218X a side (with two in the centre) in a cardioid pattern, while four Martin Audio DD6’s provided front fill and 12 Martin Audio LE1200 floor monitors delivered musicians’ reference sound. All the non-powered speakers were driven by Martin Audio MA3.0 and MA18K amplifiers.

“We had approached the promoters specifically, knowing how hard they had fought for a license in the face of strong resident objections,” continued Turner. “They knew what MLA had achieved in Hyde Park and Glastonbury. At Blackheath, we implemented the Hard Avoid preset to reduce the sound at the back of the tent and associated spillage.” Helping to optimise the system was the experienced Simon Honywill, who was brought in as consultant, while project manager was Sas Stewart. 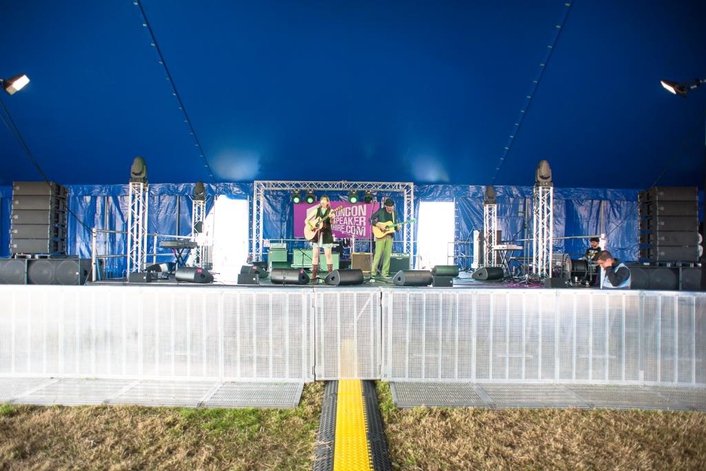 Prior to that they had debuted the MLA Compact system at the Shambala Festival in Northampton, synced to the closing firework display — an event supported by Martin Audio’s Andy Davies. They then covered the Soccer SixFest at Mile End Stadium before arriving in Blackheath.

Summing up Grant Turner says the relationship with Martin Audio couldn’t be stronger. “We started getting requests for bigger jobs purely on the strength of having MLA Mini, because it was so rider friendly. And moving up to the MLA Compact, it could hardly have started better — with three events inside a month.”

But Turner’s abiding memory is how the system really earned its spurs in Blackheath. “Harvey [Goldsmith] agreed to do an interview to camera about the quality of the production and then sent us a letter stating how amazing the sound was!”