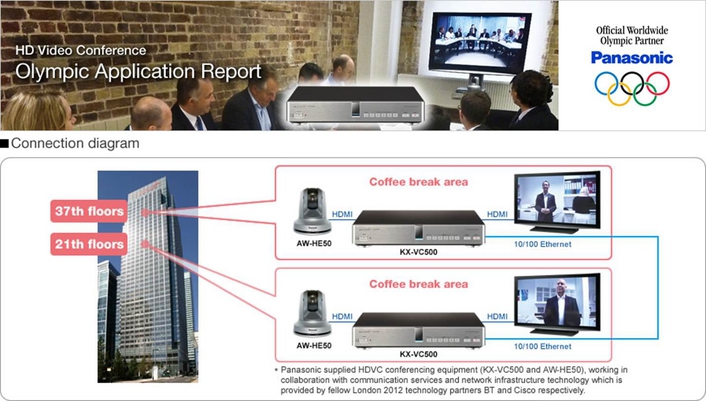 Stay in Touch at London HQ
The London Organising Committee of the Olympic and Paralympic Games (LOCOG)are responsible for preparing and staging the 2012 Games. Organising the Games isa huge challenge. With 26 Olympic Sports and 20 Paralympic Sports, it is theequivalent of staging 46 World Championships simultaneously. LOCOG will organisethese across 36 competition venues, with 14,700 athletes, 21,000 media andbroadcasters, and 10.8 million ticket-holders.

LOCOG’s task is therefore simply colossal, requiring undertakings across multiplelocations, workgroups and events and, with such a vast array of people, projects andwith the countdown timer always ticking, making the most of limited time available hascontinually proven to be an essential factor in the successful staging of past Olympicand Paralympic Games and equally in the build up to the London 2012 Games.With less than 100 days to go now until the Games begin, many people in LOCOG arebeginning to co-locate with their venue teams and spend more time offsite and atvenues. Finding ways to allow staff to stay connected with colleagues in differentfunctional areas and office locations is therefore critical to the smooth running of theLondon Organising Committee of the Olympic and Paralympic Games, as in any largemodern business.

For staff working in larger organisations it’s nearly always the norm and the greatesttemptation to send ‘yet another email’, instant message or to pick up the phone tocommunicate, especially where those staff are either in geographically dispersedlocations or in the case of staff in large buildings. With widely accepted scientificresearch suggesting that between 60 and 70 percent of all meaning in communicationis derived from nonverbal behaviour1, whilst electronic communication is often fast andefficient, for certain correspondence nothing can challenge the communicationaleffectiveness of the traditional face to face meeting.

Panasonic HD videoconferencing equipment is helping to make this possible, offeringLOCOG staff an easy and comfortable way to hold meetings across remote locations.

Successfully installed and trialled in LOCOG’s technology HQ, the equipment isalready contributing to an overall solution, which is being delivered in collaborationwith fellow London 2012 technology partners, helping to enable coordinated planningand critical communication between the teams responsible for delivering this complexand high profile project.

It has also been announced that the equipment will play an important role duringGames time operations as both HDVC systems trialled at LOCOG HQ will beredeployed to other venues during the Games themselves.

As the official AV equipment Partner of the Olympic Games, Panasonic already had agood experience of trialling the equipment during the Vancouver 2010 Winter Games.John Furlong, Chief Executive Officer of Vancouver 2010 gave his comments aboutthe benefits of the technology at the time; “I think for the purpose of interaction oververy long distances this is a very big improvement on what we’ve been used to. I thinkquite often why people have not chosen to use this technology is because it has neverbeen all that effective and crisp and clear. This is. I think you’ll find that companieswill look at this and say, ‘This is a better way to do business than getting on airplanesand travelling for days and so on.’ So, I think the future has arrived and that’s good,really good”. So for Vancouver 2010, part of what was learned by Panasonic is that itisn’t just about connecting people via video conference equipment, but doing it in away that allows true expression and even emotion to be clearly seen, regardless ofvast distances or other physical separation.

The HD Video Conference equipment used at the Vancouver 2010 Games, whichcombined HD cameras with some sixteen plasma displays, enabled a new type ofcommunication and a connection of the Chef de mission meetings between the twoVillages on a day-to-day basis. Junji Sato, HDVC Engineer at Panasonic SystemNetworks explained the same system used in Vancouver also had potential for use inwider applications such as education; “We hope that the advantages of the HD VideoConference System such as the high resolution images and clear audio will be used toconduct remote lectures to bring together classrooms that are located far away fromone another. In the office environment, we hope that it may be used to keep thebusiness hubs connected at all times, so that anyone can use it anytime they want”.

Through its use in the Vancouver 2010 Games and now in preparations for theLondon 2012 Games it has became apparent that it isn’t just visual connectivity that isenhanced and that through using HD Visual systems, organisations can also reducetime and costs spent on travel, and CO2 emissions. What’s more, Panasonic HDVC equipment can also actively contribute to an environmentally conscious operation andwith Panasonic having the goal of becoming the leading eco electronics manufacturerby 2018, the technology is yet another way of helping the company and its partnerstake steps to achieve its eco goals.

So many critical elements of the successful staging of the Olympic and ParalympicGames are dependent on tested, reliable technology that just needs to work and, oneof the interesting things is when it works best, the millions of people all around theglobe watching the Games won’t even know its there at all.