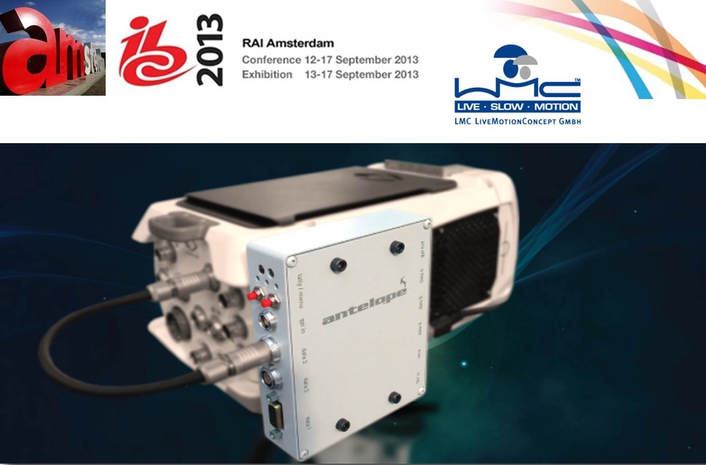 .
Yet again, LMC LiveMotionConcept launches a new piece of fine technology to complete the Antelope UltraSlowMotion family on  the camera side. The C-BOX remote controls any camera out of the Antelope range, any VRI Vision Research camera and many other devices in a multi-configurable way. C-Box features six serial data ports which are configurable as RS232, RS422 and RS485.

These ports can be used to control any attached device through serial communication. One port is as- signed to the Antelope RCP and OCP remote control family. This connection can be wireless (Antelope AIR / PICO AIR), wired or by any means of serial data transmission.
Through LMC´s outstanding UCCP (Universal Camera Control Protocol) bandwith is significantly re- duced. The UCCP is a configurable multi purpose protocol and con- tains all information regarding camera control, camera status, color correction, replay operation, tally control and many more.

The C-Box features lens control and supplies power as well.
The C-Box comes with   multiple GPI in- and outputs. Those are   configurable and can be used   to   control tally in   the  viewfinder,   as call
function, cameraman trigger and multiple other purposes. Updates and configuration changes can be done by using the maintenance USB port. Several LEDs indicate tally, status and update information. Three buttons allow updates and menu navigation. C-Box can be easily attached to any camera body. Dimensions are only 125x100x30 mm and the weight is light 400g.

Antelope DeFlicker V2.0
The De-Flickering option of the Antelope cameras has always received high accolades for helping the Antelope UltraSlowMotion eliminate that ugly flickering when shooting under low light and using stadium lighting. Now the De-Flicker Version 2.0 has just been finished. This release does not need a PC and  external   CPU  performance -  V2.0 is a full

FPGA version and sits on a tiny board which goes straight into the Antelope CCU. It comes as standard package with all MkII versions and is available as option when purchasing the Antelope PICO POV UltraSlowMotion camera. For the first time LMC makes the De-Flicker  V2.0 also available as a stand-alone product which will work with all SSL cameras (Sony / GrassValley) and all UltraSlowMotion systems from various manufacturers. The stand-alone product comes in a 19” / 1U rack. The device will house one or two boards for one or two camera operation. An on-board display will give techs various system status information and the chance for adjustments if needed. Normally the De-Flicker V2.0 works perfectly fine with the auto-detection setting - so in most cases no need for any changes in settings. The sales price of V2.0 will be anounced at IBC 2013.

Antelope PICO on PMT SpeedCam at AudiCup in Munich
Finally the Antelope PICO, LMC´s POV style UltraSlowMotion system went on a remote controlled pan and tilt head which was mounted to a high-speed rail. Both items were supplied and operated by PMT GmbH Hamburg. The rail was placed behind the left goal in Munich´s Allianz Arena during the AudiCup which took place July31st until August1st. The event was broadcasted by RTL Television on both days.
PMT´s SpeedCam is capable of extreme acceleration keeping dimensions of the rail and the dolly compact and therefore easy to mount in limited space .

Great live-shots from that new perspective using the Antelope PICO camera as well as stunning replays with up to 280 frames per second were shown on the world feed.
The latest version of the Antelope PICO features on-board De-Flickering, enhanced detail and a choice of camera link, coax or fiber connectors.
The Antelope PICO is the only POV Style Highspeed Camera which features up to 340 frames/second HD1080 replays and a permanent HD-SDI video output. It´s availble for sale now.