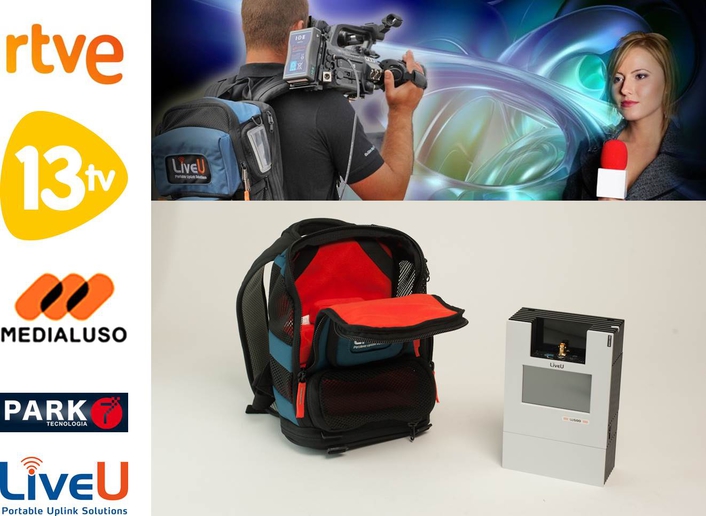 Together with partner Park7 LiveU servers RTVE, 13TV and Medialuso
LiveU, a leader in portable live video acquisition, contribution and management solutions, has announced an exciting range of deployments across Spain and Portugal in 2013 with 2014 looking equally promising. Spanish broadcasters, RTVE and 13TV, and Medialuso in Portugal have all deployed LiveU technology to bring innovative and cost-effective live coverage to viewers.

RTVE chose LiveU’s technology as part of an overall selection process for its “España Directo” programme. LiveU solutions were supplied by Overon, part of Mediapro, and the largest supplier of DSNGs in Spain. The programme, running over eight months, has benefited from four LU70 backpack units. The cellular uplinking technology has been used on a daily basis for live transmission in sometimes demanding conditions with producers able to take advantage of its mobility, speed of deployment and robustness.

Gonzaga Avello, General Manager at Park 7, said, “’España Directo’ is a very dynamic programme with reporters out and about bringing live reports back to the studio. They have pushed the technology throughout the programme’s latest run including live transmission from a small plane as well as using it successfully in crowded, hectic places. Using LiveU has allowed them to bring a far more immersive experience to their viewers.”

Meanwhile 13TV, an independent broadcaster in Spain has been successfully using three LiveU backpack units for its news output, bringing countless stories to an eager audience. Medialuso, Mediapro’s Portuguese offshoot and the largest production and services company in the country, has been using six LU70s for a range of production requirements with its customers. Media company A Bola has been using the technology for sports coverage (using  3G and 4G) while live news and events broadcasting has been the requirement from other clients, among them Porto Canal.

The launch of Vodafone 4G in Spain was also covered using LiveU technology. This was an event with 1,500 Vodafone Spain employees. The CEO of Vodafone Spain and Portugal entered the employee convention and later the press conference on a Segway with a camera and a LU40 belt-clip unit, streaming at over 5Mbps constantly.

Zion Eilam, LiveU’s Head of Business Operations Europe, said, “2013 was a really strong year for LiveU across the Iberian Peninsula and we greatly appreciate the efforts of our partner Park 7. We’re very pleased to see that our technology is being used in such a variety of ways, from fast-moving sports broadcasting to innovative news coverage and on to corporate events. It truly is a new age of content acquisition.”

LiveU is a leader in portable live video acquisition, contribution and management solutions. LiveU's award-winning technology enables live video transmission (HD and SD) from any location around the world.  With top-tier customers in 60+ countries, LiveU’s solutions are being used for breaking news and high-profile events, such as the Sochi Winter Olympics, FIFA World Cup™, US Presidential Campaign, London 2012 Olympics, Royal Baby, Hurricane Sandy, Super Bowl and US Collegiate Championships. From backpacks to smartphones, LiveU offers a complete range of devices for live video coverage. LiveU’s solutions include multiple 4G LTE/3G, HSPA+, WiMAX and Wi-Fi cellular links, which are optimised for maximum video quality based on the available network conditions.