Integrates LiveU’s portable uplink solutions with make.tv’s live, cloud-based video production studio
make.tv, pioneers of cloud-based production studio technology, and LiveU, the pioneer and leader in portable live video-over-cellular solutions, have announced a partnership that will see the integration of the two technologies to provide end users with direct access to LiveU feeds as part of the make.tv production technology.

make.tv offers cloud-based, collaborative and interactive live broadcasting solutions using a web-based interface. Its versatile production software allows users to create multi-camera live streams adding pre-recorded media and even audience cameras. The Studio is the heart of the make.tv experience and is a powerful application where users’ live productions come together from a variety of sources, including live streams, uploaded content, social media applications.

LiveU's live HD video feeds will be transmitted directly to the make.tv Studio where the stream can then be mixed with other incoming live streams and enriched with built-in designs, effects, interactive functionalities and uploaded media. The final live stream (or “line cut”) can be broadcast live to any RTMP-capable streaming server or destination, for example YouTube Live, Ustream or CDNs, including Akamai or Limelight.

Ronen Artman, VP of Marketing, LiveU, said, “For mobile and remote production, cloud-based solutions, using a well-designed and integrated GUI, provide a new level of flexibility for innovative users. By fully integrating our technology, make.TV will be able to provide, cost-effectively, an even greater experience for viewers, bringing the world closer to home. Not only does LiveU’s technology – be that backpack, belt-clip, smartphone-app or software-based – provide tremendous mobility and flexibility but the studio can now be operated from a laptop at any location with an Internet connection.” 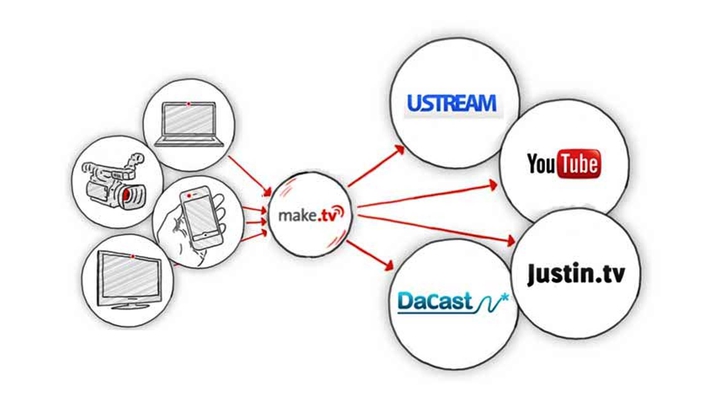 make.tv is a production studio running within a browser and therefore enables live collaboration with remote teams. Users can produce a live stream with multiple cameras and handle feed  switching as well as the onscreen look and feel. It has interactive capabilities like a back channel via which viewers can send their live video to the studio and become part of a live show.

make.tv CEO, Andreas Jacobi, said, “The technology can be used for any live, breaking news or sports event where multiple cameras are in use. It’s also an ideal solution when contributions are coming in from multiple locations with reporters and editors also in different locations. We have harnessed the power of the cloud to create this integrated solution.”

About make.tv
make.tv is the leading cloud based live video production platform. The versatile solution allows production of multi-camera live streams, mixing with pre-recorded media and mobile/audience cameras, and distributing it live to Facebook, live destinations such as YouTube Live and Ustream, many CDNs, or simply to corporate websites. Inputs can come from anywhere in the world and easily mixed into output streams as the production studio resides in the cloud. Interactive components include viewer polling and voting as well as inviting the audience to become part of a show with their own live video. Clients include MTV/Viacom, ZDF, Mercedes Benz and tape.tv. make.tv is run and owned by SMT Streaming Media Technologies GmbH, based in Cologne, Germany.