Live and Behind the Scenes with L’Equipe

Each interview lasts 30 minutes and the topic is determined by the watching audience. A moderator selects questions from the many thousands of live contributions and feeds those to a tablet used during the interview by journalists. Filming takes place at one of 20 clubs currently competing in France’s Lique 1.

Handling the production and streaming of this series is Paris based Canalchat Grandialogue. The fifteen man team has over the past 14 years produced more than 3,000 live video webcasts for a variety of companies, including France Television, Orange, Clarins, Citroën, HSBC, Michelin and McDonald's.

At the heart of these live productions is a compact flyaway kit built around Blackmagic Design products. Reliability and mobility were big factors when it came to developing the rig, according to Chief Operation Officer (COO) Frank Fellous.

“We are always on the move whether it is by car, train or plane. Typically our live productions require between two and three people. Bearing that in mind, I wanted to build a reliable, light weight multi camera studio capable of filming and streaming events in broadcast quality HD.” 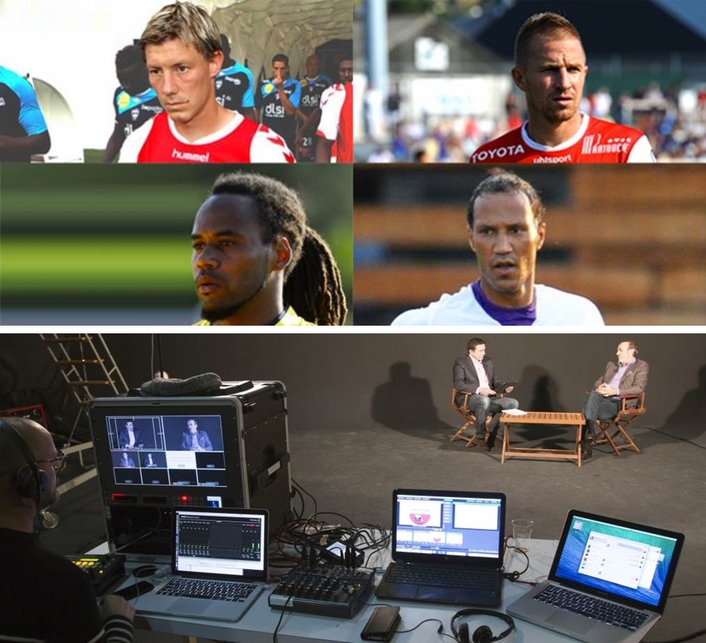 The L'Equipe series is shot on two HD cameras, which are controlled remotely. “Once the camera positions are set up, we take the two SDI sources straight into an ATEM 1 M/E Production Switcher and monitor both of the feeds on Blackmagic’s SmartView Duo. We then produce our program output using the ATEM Software Control Panel.”

“And while the vast majority of our productions are still filmed in HD, we are beginning to see more interest from our clients in Ultra HD 4K. To keep ahead of the game we have just added a new 4K ready live event rig around Blackmagic Design’s ATEM Production Studio 4K. This has the added benefit of future proofing our business for 4K while allowing us to use the rig on existing HD jobs,” continued Fellous.

“For title clips and lower third graphics, we use a MacBook as a video source over an HDMI connection. This allows us to move graphics as files between our laptop and the production switcher. Accessible through the ATEM’s Media Pool, we then create our mixed program feed. We top and tail the show with title clips and record the mixed program output in ProRes 422 onto solid state drives (SSD) using a Blackmagic HyperDeck Studio. Our workflow also features a secondary recording device for backup purposes.”

“For audio we are using an analog Mackie mixer. We have two audio inputs, one from the host and another from the interviewee, both of whom are wired up with their own Sennheiser microphone.”

“Before we can stream the program, we first encode the mixed program output via a Teradek Cube, which is connected to our IP router. The set up is generally the same for all events, however on occasion we might have to adjust the streaming bit rate from 750 Kbps for SD to 2500 Kbps for HD. It all depends on whether we have access to DSL or fiber. For streaming the content we rely on CDNetwork and Edgecast. At the end of each show, a replay is made available immediately on the L'Equipe website. We also send an HD version in 1080p25 to the client’s production team.”

“No two events are ever identical. And when you are out on the road you need a setup that is reliable and flexible enough to handle whatever might come your way during a live production. That is why Blackmagic Design was an obvious choice. ATEM was the only rack mount broadcast grade production switchers to offer this many I/O possibilities, whether it be HDMI or HD-SDI.”