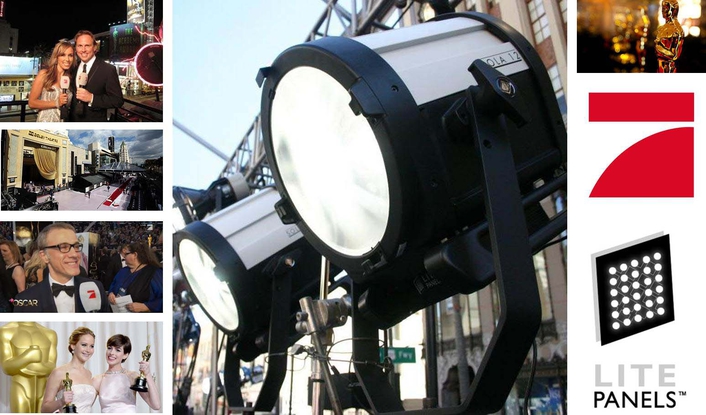 .
In one of the first high-profile uses of the new 12” Fresnel LED fixture from Litepanels, a pair of daylight balanced Sola 12™ fixtures filled a critical need for red carpet interviews by German television station Pro7.

“The red carpet path along Hollywood Boulevard is surrounded by tall buildings,” said Director of Photography Peter Krajewski, who for the past six years has been responsible for a program broadcast live from the red carpet. “For a portion of our broadcast, this puts our talent and the stars they interview in shadows, but with a sunlit bleacher section directly in the background.”

Krajewski had used HMI parabolic fixtures in the past, with their accompanying box of lenses, heavy stage cables and weighty ballasts. While those HMIs supplied enough light to balance illumination of the talent in the shade with the sunlit bleachers behind them, it meant multiple trips carrying lighting equipment from the parking structure to the street, and a pair of 20A circuits to power the lights.

In tests with the new Sola 12™ Fresnels, Krajewski found a number of advantages, including easily balancing the foreground and background illumination while using less than half of a single 20A circuit and transporting all of his lighting equipment in a single trip. 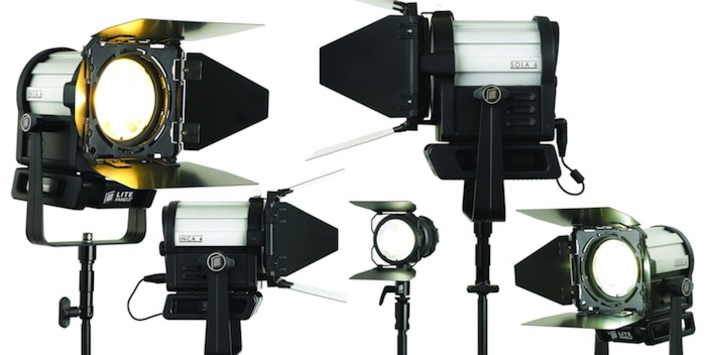 “The sun moves through the sky while we’re live on the air, to a point where there’s a tremendous difference in the amount of available light hitting the background bleachers versus our talent, who are in complete shadow,” said Krajewski. Because the LED Fresnels were connected to a small DMX panel, his sound engineer was able to not only add more light by adjusting the intensity, but also focus the light beam a little tighter to overcome the sunlight.  “That’s a feature simply not available on traditional HMI lights,” Krajewski noted.

“Later in our broadcast, the sun moves so that both talent and the bleachers are in the shade. With the HMIs, we could only dim the lights to something like 70%, and my sound guy would have to fly silks in front of the HMIs to drop the intensity during a commercial break. Because the LED fixtures dim all the way from 100% down to zero, we were able to use the DMX box to quickly achieve the perfect balance.”

Krajewski found another feature he liked about the Sola 12 fixtures. “I didn’t have to use barndoors or add any diffusion in front of the Fresnel lens at all; it was a soft enough light that I was able to light the talent with just the bare light shining through the Fresnel. With the HMIs in years past, I had to bring barn doors to rig diffusion in front of the lenses.  We were able to set up and break down much faster than in previous years.”

The Litepanels Sola 12 LED Fresnel fixture combines the performance of a large Fresnel with the advantages of LED technology. It supplies powerful and controllable daylight balanced illumination using just a small fraction of the energy required by a traditional tungsten or daylight 2K fixture. The 12” Fresnel lens emits an even, collimated light source that can be focused and controlled for maximum versatility. An integrated DMX module provides the unprecedented control of simultaneous remote dimming and focusing. The same performance can be found in a tungsten balanced sister fixture, Litepanels Inca 12™.

About Litepanels
Litepanels was founded in 2001 by 5 professional gaffers and engineers who saw the future and pioneered LED (light emitting diode) lighting for motion pictures, television and the audio-visual industry. Their Emmy® award-winning technology has now been used on thousands of productions worldwide and is trusted by the world’s leading broadcast organizations.
Backed by the Vitec Group’s legacy of 100+ years in the broadcast and production industry, Litepanels continues to expand its suite of flicker free, color accurate, fully-dimmable soft lights that talent and Lighting Directors admire. These environmentally friendly fixtures practically pay for themselves with power savings and long life, setting a new standard in professional lighting.  Along with other leading brands in the broadcast and professional videographer industry, Litepanels is part of Vitec Videocom, a Vitec Group company.