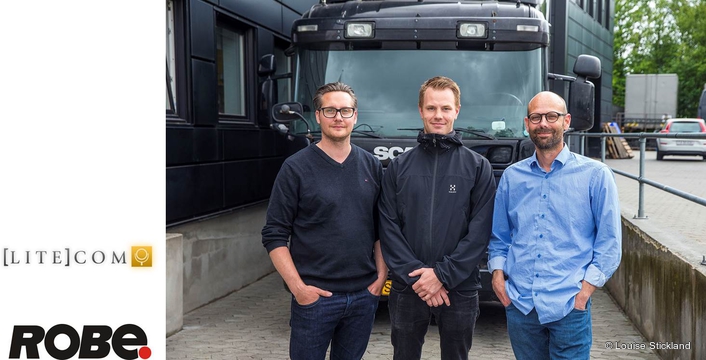 Litecom is a top Danish lighting, video and automation rental and production specialist headquartered just outside of Copenhagen in a modern industrial building that has been designed to both be functional and look cool, providing an invigorating working environment.

The company, headed by Rasmus Sorensen, has just invested in Robe BMFL Blades, DL4S Profiles and DL4F Wash luminaires which have joined the 80 Pointes already in their rental inventory, as the general demand for Robe fixtures in Scandinavia is growing.

Litecom was founded by Rasmus, his brother Morten and his father Erik in 2000 and now has 35 full time employees, a pool of regular freelance talent, a large inventory of equipment with state-of-the-art drawing and visualisation facilities, an expansive warehouse, a policy of continuous investment in current technologies and an operation brimming with ideas and exciting future plans.

It currently also has bases in Sweden, Germany, Georgia and the Ukraine, and very much sees its future business in a pan European context. Litecom, in conjunction with its Swedish office, supplied lighting for the 2016 Eurovision Song Contest in Stockholm which included 94 x BMFLs specified by Lighting designer Fredrik Jonsson.

Seeing the BMFLs create such an impact and work so reliably throughout the long Eurovision technical and rehearsal period at the Globe – they were cross rented from Swedish dry hire company Woodlite - encouraged Litecom to start purchasing their own.

Rasmus comments that the high CRI, the nice zoom and optics are all features they like on the BMFL and on the DL4 series.

This latest purchase from Robe’s Danish distributor LightPartner includes 10 x BMFL Blades, 20 x DL4S Profiles and five DL4F fresnels , some of which are destined for a high profile theatre project in Sweden, a project which has come via Flashlight in Holland.

Over the years Litecom has dealt with several leading moving light brands, and Robe came on to their radar in particular after the launch of the Pointe in 2013, then with the original DL series of LED luminaires specifically designed for theatre and of course … the BMFL.

They are also currently engaged in developing a proprietary follow stop style remote control system which is based around a BMFL Blade as the luminaire. They chose the fixture because of its very ‘organic’ movement, the real-time speed of its functions and the precision. With all the Lee colours listed on a macro, using it in a rock ‘n’ roll show or as a TV  special makes it very simple to change colours and match or contrast to the general lighting via the buttons on their remote system.

Their Pointes have quickly become a workhorse product that is now rarely in the warehouse – something that all rental companies want to hear!

There are high expectations for the BMFL and DL4S, and in particular a lot of excitement related to the longevity of the LED module compared to discharge fixtures and the cost of regular re-lamps.

“Robe is producing a good range of interesting well-made products which are really nicely designed and reliable,” stated Rasmus.

Litecom’s roots were initially in television – Erik was a lighting designer for Danish National Broadcaster DR for many years – but that soon diversified once the initial rental company became established, and they are currently experiencing a massive increase in the amount of live concerts, music and special events sector projects on which they are asked to work in a number of capacities..

Litecom offers several additional / related services as well as equipment rental, and these include production planning and production presentation and management, giving the ability to take on all aspects of an event if required, and with it, lots of added value over and above  just being an equipment house.

The company has always pitched itself at the top end of the market in terms of production values, technology and brands – when a decision is made to go with a brand, it’s a meaningful and considered move, as it was the case with Robe.

Rasmus sees “design, infrastructure and people” as key elements in promoting and growing the business in addition to having the most flexible equipment solutions and the ability to think out-of-the-box!