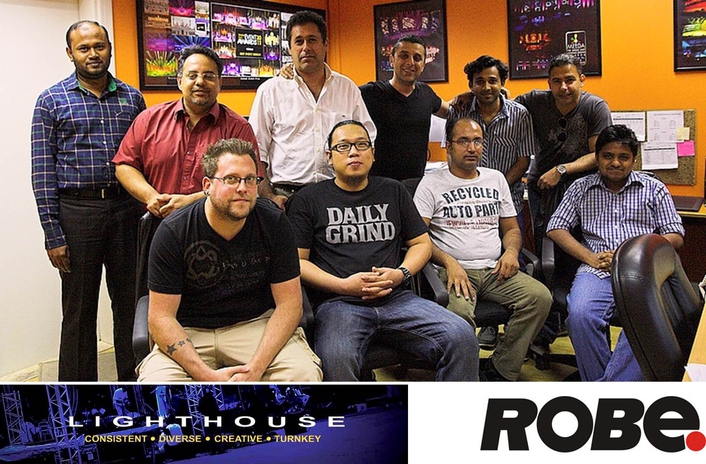 .
Multi-Award winning company Lighthouse is one of the most successful and prolific lighting and production design practices in Dubai. Headed by the charismatic Terry Miranda and his brother Steve, Lighthouse is busy continuously through the thriving events season in the UAE, and also works in other parts of the Middle East.

The Mirandas founded the company 10 years ago in 2003, initially with Terry as an LD and since then have evolved into a complete turnkey design and production house with a reputation for imagination and flair.

Lighthouse invested in Robe products immediately after they set up, and have stayed with the brand. They now have over 250 Robe units of various types which are used almost exclusively to facilitate their own shows.

The kit ranges from the most recent CycFX 8s, MMX WashBeams, ROBIN Beam 300s and PARfects – to older products like the ColorMix 240, ColorSpot and ColorWash 575 and 1200E ATs and 2500 ATs. The vintage products, even those seeing their first decade of active service, are all still going strong!

The appeal of MMX WashBeams is their multi-functionality, explains Terry, together with the light weight. Constantly up against time restraints when on site, when Robe produced a fixture that was equally good as a Wash and a Beam fixture … it meant that they only had to rig half the amount of lights to get an exponential increase in effects and dynamics! The light weight also makes the MMX WashBeams extremely quick to rig.

“The colour and the gobos are great and they are generally really diverse lights which are perfect for the shows we are designing and producing”.

This Year Lighthouse won Best Lighting Design at the Middle East Event Awards (MEEA) for their work on the Al Burda Award, an Islamic Arabic poetry and calligraphy competition staged at the National Theatre in Abu Dhabi.

Lighthouse was also nominated in four other MEEA categories for a total of five different events including this one!

He recently used all 24 of their new CycFX 8s – purchased off the Robe stand at this year’s PALME Middle East expo - for a UAE Ministry of Culture event in Ajman City. He placed the CycFX 8s in lines in between columns of LED screen upstage, with some in the ceiling over the stage.

He’s extremely pleased with their latest purchase. “The zoom is excellent and they are a great fixture for breaking up a backdrop. They can also be pixel-mapped which adds a whole new layer of possibilities,” he affirms.

On the same show he used some of their original ColorMix 240ATs, tucked inside some structural set ‘ribs’ at the back of stage. “It’s still one of my favourite all-time fixtures,” he says fondly, “The combination of the older units and the brand new Robe technology is amazing – you really have the scope to paint very beautiful pictures”.

“Going with one manufacturer that can offer all the functionality and quality you require, and understanding what those lights are capable of doing are key to the way we work. It also means that our crew and technicians learn how they are constructed and get familiar with new units much quicker because they know Robe’s build techniques,” explains Terry.

“Our purchasing decisions come from a design and creative perspective rather than being price driven”.

He adds that they have a great relationship with Elie Battah, General Manager of Robe Middle East. “We look for a level of perfection in Robe and they deliver this time and time again”.

Over an average year, Lighthouse will light & design 25 to 30 shows and events, concentrating mainly on larger ones, which is an intense schedule. Terry confirms that in all that time none of their Robes have ever gone down on a show – not one single one of them!

He’s recently visited the Robe factory and seen the newest showroom demos in Valmez, and they are now seriously looking at adding Pointes and more MMXs to their choice of available creative tools.