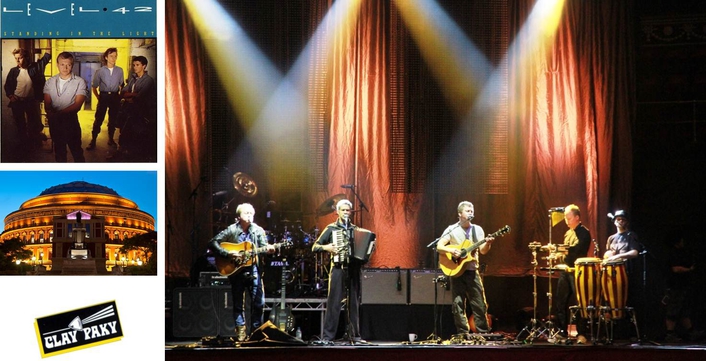 .
British rockers Level 42 have been living up to their 1984 album Standing in the Light by performing under a rig of Clay Paky Alpha Spot HPE 700s at London’s Royal Albert Hall.

Lighting designer Yenz Nyholm says they form a key element in his lighting design: “We’re only transporting 12 spots in the rig, which is not a lot especially when you get into big venues. The output you get with a Clay Paky is really striking for a 700W lamp. The output and the optics were the main reasons for choosing the Alpha Spots HPEs, and also the fact that they move incredibly fast.”

The strength, versatility and nimble nature of the Alpha Spots have enabled Nyholm to build a look for the show which really complements the band’s image: “The main thing I’m using with the spots is the colour - I use a lot of very slow colour fades. Obviously it’s got to be a CMY fixture, but apart from that it’s a lot of striking, sharp gobos. A lot of the show is about picking out members of the band for solos on about seven different positions on stage. The sharpness of the output and the brightness of the Alpha Spots make these effects look amazing.”

As for many touring shows, equipment size matters. “We don’t have a lot of room in the truck,” continues Nyholm. “The Alpha Spot HPE 700 is the smallest 700W lighting fixture on the market so they are ideal for our needs. They only weigh 22 kilos, and because of this they also earns points for eco-friendliness.”

Further features of the Alpha Spot 700 include a 15° - 35° zoom, enabling tight focus for highlighting solo spots and fast pan and tilt movements to suit the pace of any gig.

The concert celebrated the 25th anniversary of the album Running in the Family, which produced hits for Level 42 such as ‘Lessons in Love’. During the show, the entire album was played, note for note, in order to recreate the joy of listening to this groundbreaking album, followed by an acoustic set and a final hour of other big hits, giving the whole experience a party feel.