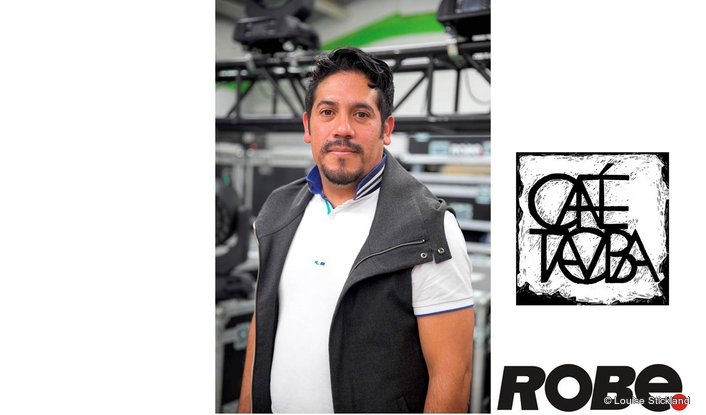 The rich and vibrant Latin music scene generates a lot of ‘crossover’ between artists and the production side of the industry in the Mexican rental world. Most people involved in companies started their industry careers playing in bands and many are still active musicians or are involved in artist management.

Sergio Serrano – also a big fan of Robe -  is one of those charismatic and multi-skilled people whose lighting and video rental company, LED Project is one of a number of businesses run alongside  his role as production manager of Café Tacuba, one of Mexico’s most famous and popular  bands. He also works closely as a show producer with Radio station MVS staging around 100 events a year.

Sergio first decided that LED Project should invest in Robe equipment in 2013, shortly after the Pointe was launched. He immediately saw big potential in the small size and multi-functionality of the unit for the Mexican rental market, where budgets are usually tight and all the kit has to be as versatile as possible.

In two years, the Robe inventory has expanded to include 24 x Pointes, 8 x LEDWash 1200s, 8 x LEDBeam 1000s and 10 x BMFL Spots, which were also the first to be purchased in Mexico just after their launch in autumn 2014. He also has MiniMes and CycFX 8s … all the latest products … as Sergio also likes to be a bit of a lighting trend setter!

All the Robe elements have been delivered by Mexican distributor Vari Internacional whose sales team are extremely proactive.

The BMFLs were initially purchased to illuminate the Torre Latinoamericana in Mexico City last Christmas in ‘shimmering gold’ for a promotion by Italian chocolatiers Ferrero Rocher.

Sergio was – proudly - also the first in the country to purchase CycFX 8s and LEDBeam 1000s.

He comments that having a ‘house’ brand like Robe on-board gives the company a good deal of kudos.

Café Tacuba’s last full tour covered 44 dates in Mexico and the US, and LD Herman “Tiffy” Castellanos used 68 Pointes, which were trucked along with the rest of the gear, from Mexico. Sergio first turned Tiffy on to Pointes ... and he’s worked with them ever since!

Currently the band is engaged in a 20-date festival tour utilising 32 Pointes as a floor specials package, together with some LEDBeam 1000s, another fixture that is fast becoming a favourite in Mexico.

Sergio is delighted with all of his Robe purchases and declares that he wants LED Project to be an all-Robe moving light house. He also wants to be the first rental company in Mexico to light a massive stadium style concert with all Robe fixtures!

Recently LED Project’s BMFLs created some serious WOW factors at the Electric Daisy Carnival (EDC) dance event in the 26,000 capacity Foro Sol arena, where they were rigged on special poles and illuminated the audience, dazzling all with their brightness and power!

Two weeks later they were in action again as part of an all-Robe moving light rig supplied to the Auditorio Telmex in Guadalajara.

“Robe is very well positioned in Mexico at the moment,” observes Sergio, “The work that Vari has done and the fantastic back-up, support, product training and awareness sessions that they offer has really helped put the brand on the map”.

He also comments that with the Pointe in particular taking off, there is a lot of cross rentals happening between the major rental companies … which is stimulating all of their businesses.

LED Project, based in the Iztacalco area in the east of DF, is currently in the process of moving to new and much larger warehouse premises as well as servicing 20 – 40 shows a month – of varying sizes and complexities  ... so the schedule is hectic!

They have also just spec’d Robe for a new 4000 capacity big top live music venue located on Calz de Tlalpan one of the city’s major arterial roads, which opens in September.

Sergio’s partner in LED Project is Jesus Guerro, a busy LD who also has his own company, Fade In, which has some Robes including Pointes, CycFX and LEDBeam 1000s. He started using Robe products in his designs two years ago and comments, “It’s great being able to spec and source lots of different Robe fixtures in Mexico now – the more accessible they become, the more they will get specified!”