LED Project’s Sergio serrano in the centre, with SHOWCO’s Mario Torres Vazquez on the left and Luis Becerril Rosales on the right

LED Project is one of the most important technical lighting and visual /video rental specialists in Mexico City. Run by the charismatic Sergio Serrano, the busy company is based in a large warehouse space just off Calz de Tlalpan one of the city’s major arterial roads and a colourful and lively area! Apart from owning the largest rental stock of current and new Robe products in the country – with over 200 BMFLs, Spiiders, Pointes, LEDWash 300s and 600s, LEDBeam 1000s, CycFX 8s and MiniMe’s – in the inventory, Sergio has been a major Robe brand ambassador for the last five years.

He is also very proud to have been the first in Mexico to purchase both LEDBeam 1000s and Cyc FX 8s.

His decision to invest in Robe early on, and to specify Robe moving lights for some key music clients that he has production managed, has also set trends and encouraged others to follow. All of which has helped to raise the brand profile and put Robe on the map in this crucial ‘crossover’ territory between the U.S and Latin America.

Sergio first decided that LED Project should invest in Robe in 2013, shortly after the Pointe was launched. He immediately saw big potential in the small size and multi-functionality of the unit for the Mexican rental market, where budgets are usually tight and all the kit has to be as versatile and stretch as far as possible. In that respect, the Pointe was a bit of a ‘no-brainer’.

As the various new Robe products have come online since then, he’s gradually sold off or re-homed his older series lights in long term installations where they are still all going strong!

While Sergio’s enthusiasm for Robe has certainly been beneficial, he also feels that becoming a ‘Robe house’ has helped him win new business as the general brand profile has increased worldwide. With Robe in stock, clients know that LED Project is a serious player.

His latest purchase from Robe’s Mexican distribution SHOWCO, has been 12 x Spiiders. These will shortly be followed by another 12, and he also, naturally, has his sights on the MegaPointe! 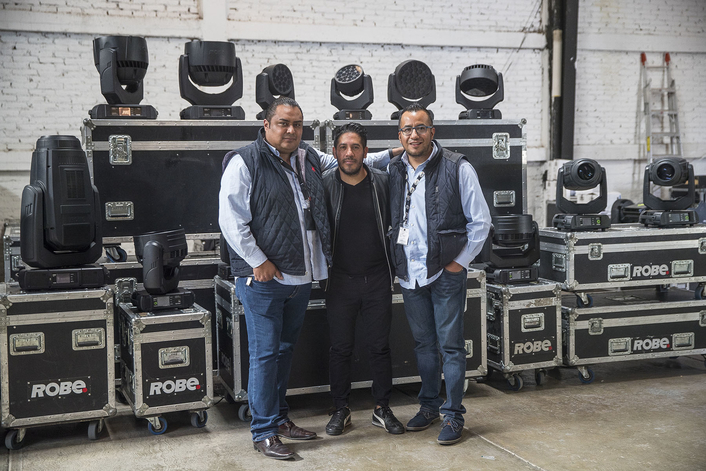 LED Project’s Sergio serrano in the centre, with SHOWCO’s Mario Torres Vazquez on the left and Luis Becerril Rosales on the right

There has been a massive demand for Spiiders” he explained, “and having had so much work from the LEDWashes, I knew it was a sensible product with a good ROI. Apart from that it has the additional versatility of being a wash or a beam, with a fantastic array of colours, very smooth mixing and a beautiful quality to the light output”.

He thinks Robe’s newest generations of ‘hybrid’ fixtures are all extremely useful in markets like Mexico as you can do so much from one unit. And due to the high efficiency and brightness, you potentially need a lot less fixtures to nicely light, for example, a car show booth.

The tech support and service from SHOWCO is good he elucidates and they can also help facilitate cross-rentals to boost fixture counts for shows when needed. This happens quite frequently in Mexico, and companies who are often bidding on the same initial jobs , are usually happy to cross-hire and still make money from the rental even if they didn’t win the business outright! .

Sergio has over 25 years’ experience as a production industry professional, and although he started as a Noize Boy, once he became fired up by lighting, that’s where his heart remained!!

LED Project supplies around 65 or 70 shows a month with lighting and video equipment in peak periods straddling all sectors. They do a lot of music based work like concerts and tours, together with corporates, experientials and parties of varying sizes, and currently have 38 people working full time with a regular pool of freelancers.

Sergio and his team also run – and provide technical production for - the 4000 capacity Carpa Astros big top live music and performing arts venue which is immediately adjacent to their warehouse.

Upcoming major shows in which LED Project is involved will include the EDC Festival in February at the Autódromo Hermanos Rodríguez, and Phil Collins at the Palacio de los Deportes in March 2018, Although there is some stiff competition pending - Sergio is hoping that he will be able to claim another Robe first in Mexico – with a MegaPointe purchase!