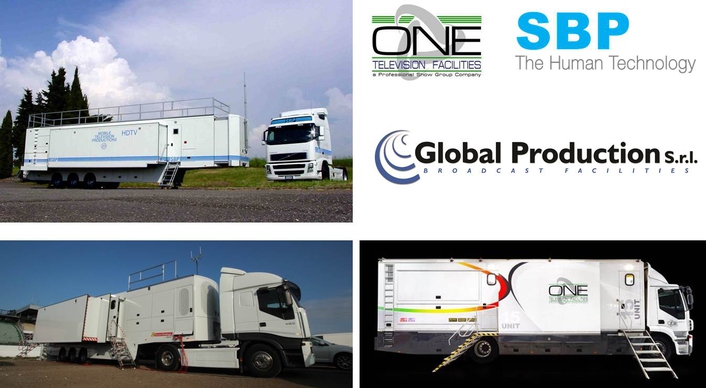 There is a new international name in OB services in the form of The Alliance, a group established by three acclaimed Italian companies: One-tv, Global Production and SBP. They are the leading players in the Italian market, and collectively, constitute one of the largest OB forces in Europe.

One of the major strengths of The Alliance is its extensive technical assets, which include nine HD OB Vans: two from SBP, four from Global Production, and three from One-tv. Among other facilities, The Alliance offers four flightcase solutions to be transported in special containers and on scheduled flights. These are the same flightcases (and, indeed, OB vans) currently used by SBP to enable coverage of MotoGP races.

A further complete system in flightcase is provided by One-tv and is currently used for personalised production elements on behalf of Sky Italia and customisation of the same MotoGP coverage.

In addition, by integrating a flightcase from Global Production with powerful equipment provided by One-tv, a high-tech control room has been created. It is equipped with as many as 30 networked HD TV cameras, used to film international superbike events for Dorna Sports.

Another flightcase solution has been designed to fulfil special tasks and 4K capture. In addition to producing live testing in the field for sports venues and broadcasters, it was recently used for an entertainment production at Milan’s world famous opera house La Scala.

Collectively, The Alliance currently owns more than 120 HD cameras, over 60 tele lenses and 20-plus EVS systems, among many other items of equipment.

Business objectives
The primary goal of The Alliance is to concentrate the business on broadcast customers active in areas ranging from news to entertainment, but with a particular focus on sports.

Davide Furlan, marketing manager of The Alliance, explains: “The Italian market offers little opportunity at the moment and it is rather depressed, so we decided to do our utmost in foreign markets and to [emphasise] very strongly [the strengths of] our offer. We have a technical and operational capacity that is well above the average, [and hence] we want to create an international entity. SBP has recently faced moments of internal restructuring and radical reorganisation, while the other two entities, Global Production and One TV, saw a great opportunity to join SBP to strengthen the know-how and technical [inventory]. The basic idea is to be able to aggressively attack the European market, since the Italian one will not allow any growth in the medium- and long-term.

“We can definitely say that we already serve well more than half of what the market can deliver here and abroad, while we have also created excellent relationship with the leading broadcasters like Sky Deutschland, Fuji Television, NHK, ZDS and other producers, as well as Dorna, B4Capital, etc.”

In practice, after a long history of competing in the same market, the collaborative venture represents an opportunity to explore a shared vision and common purpose. The three companies will remain active in parallel for a couple of years, before being completely incorporated within The Alliance. Accordingly, they are still undertaking existing individual commitments, such as World Cup Alpine and Nordic Ski tournaments, Serie A football and more.