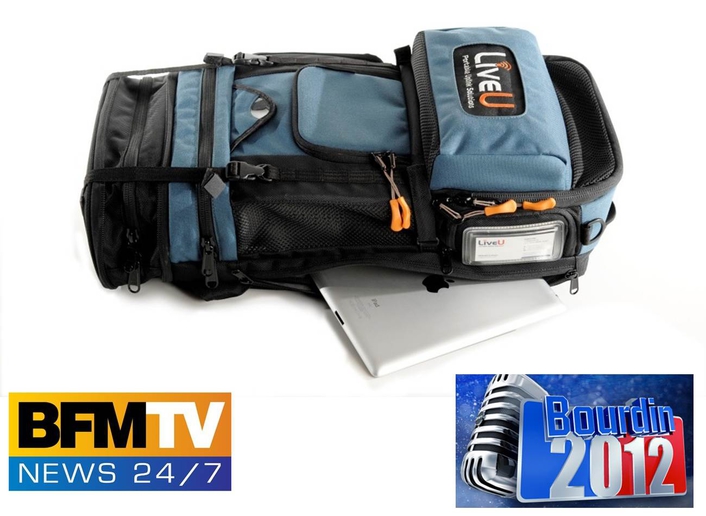 LiveU’s flagship LU60 product is the industry’s first bonded 3G/4G LTE backpack with proprietary RF technology
LiveU, the pioneer of portable video-over-cellular solutions, has announced that BFMTV, France’s leading news channel, has renewed and expanded its global agreement with LiveU for use of its flagship LU60 video uplink solution, following a comprehensive review and evaluation of alternative solutions.

BFMTV, a 24/7 non-stop news channel with more than 160 journalists and a motto of “Live First!” has been using LiveU units for more than two years for daily newsgathering and high profile events, such as the 2011 British Royal Wedding and the 2010 FIFA World Cup in South Africa. Most recently, the French broadcaster used LiveU to bring dynamic content of the NZ Rugby World Cup to viewers in France as the national team progressed to the final.

Thomas Jumel, Head of Production at BFMTV, said, “We’ve used LiveU backpacks in all kinds of situations, both in France and internationally, as the main live feed and as a back-up for OB units. We have deployed the units in cities and the countryside, in helicopters, cars, on motorcycles, and boats. We also use the technology to send video files as well as feeds as it can provide a fast connection from the field back to the newsroom. LiveU was the first to provide efficient transmission via cellular networks and they have a strong technology lead.”

Jumel added, “For the recent Rugby World Cup in New Zealand, we looked for a solution that would allow us to get close to the stadiums. LiveU’s LU60 technology enabled us to be both mobile at the events and first to react as news developed. We could easily fly to stadiums with the LiveU backpack and get the footage that we wanted.”

Olivier Attali, LiveU’s VP Sales, said, “BFMTV is recognised as a highly competitive, professional news provider that’s constantly innovating. We are very pleased that our cellular-based technology is allowing top media companies, such as BFMTV, to broadcast live video when previously cost and complexity could prevent its usage.”

About BFMTV
BFMTV  is a free-to-air news channel based in France, available to the whole world via digital television, cable and satellite. Its name is a combination of "BFM" (presently BFM Radio) and the acronym "TV". It’s currently the most watched news network in France.