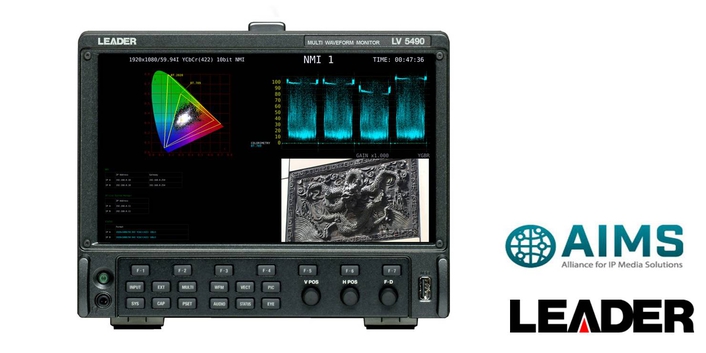 Leader Electronics Corporation has joined the Alliance for IP Media Solutions (AIMS). A globally active producer of high-grade test and measurement equipment for the broadcast industry, Leader is in full accord with the desire expressed by a growing number of broadcasters and media organisations to implement IP-based technology alongside legacy SDI-based systems or even to replace SDI entirely.

"The television industry is in fast transition as it embraces higher display resolution standards such as 4K, higher dynamic range, wider colour gamut and the increasing use of IP," comments Leader's European business development manager Kevin Salvidge. "Joining AIMS demonstrates Leader's continued commitment to providing the industry's technical managers, content producers and post-production creatives with all the facilities they need to operate successfully in an increasingly multi-standard world. We are allowing broadcasters to migrate from the traditional SDI world to the brave new IP world at their own pace, with test and measurement products that operate in either or both environments."

The Alliance for IP Media Solutions (AIMS) is a not-for-profit organisation dedicated to the education, awareness, and promotion of industry standards for the transmission of video, audio, and ancillary information over an IP infrastructure, as well as products based on those standards. The group represents the interests of broadcast and media companies as well as technology suppliers who share a commitment to facilitating the industry's transition from SDI to IP through standards and interoperable solutions that enable the rapid evolution to open, agile, and versatile production environments.