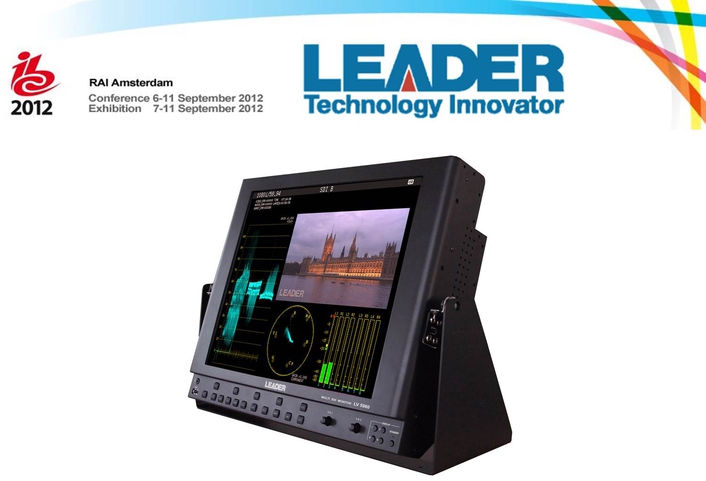 Designed for easy use during live production, post-production and in technical support, the LV 5980 incorporates a 17-inch TFT display that can be used to monitor up to four SDI signals simultaneously in a vertical or horizontal row, allowing rapid comparison of gain and black balance values from multiple cameras. Video signal waveform, vector display, picture and multiple input signals can be displayed simultaneously. The LV 5980 can make multiple waveforms easier to identify by using a different waveform colour for each input channel.

Additional display features include a level meter and Lissajous curves for embedded audio, a transmission error indicator, five-bar peak video signal level, 3D-Assist and Leader’s unique CINELITE. Each display can be viewed at full screen size or in 2 x 2 multiscreen mode with a different display shown in each quarter. Video signal waveform, picture and audio level meter can also be viewed as a thumbnails.

“The LV 5980 builds on the company’s long experience in developing test equipment for easy use by content creators and broadcast system engineers,” states Richard Heath, Leader’s European Regional Development Manager. “CINELITE allows the levels of specific points in an image to be checked and managed on an intuitive graphical basis which is equally appreciated by creatives and engineers. The gain of multiple cameras can be adjusted quickly and precisely using a specific reference point."

The integrated CINEZONE feature allows a cameraman to check the luminance distribution of the entire picture display at a glance. It overlays a scale of colours on the image depicting exposure levels based on a blue to red spectrum. Blue indicates near-zero values and red indicates maximum. This thermograph style provides fast visual confirmation that a camera is reproducing what would be expected. Shadows are highlighted in blue, allowing near-black detail to be examined much more easily than when viewed as a conventional video image.

The LV 5980 can accept tri-level sync or PAL or NTSC black-burst signal as a waveform display reference. Incoming YCbCr can be converted to RGB or a pseudo-composite signal and shown on the video signal waveform with adjustable magnification and line selection. Other adjustable display parameters include colour temperature, brightness, contrast, aperture adjustment, and gamut error locations.

Up to 30 presets can be stored for fast front-panel recall. Captured data can be displayed on the LV 5980 and saved as bitmap files to USB memory for transfer to a PC.

Lip-sync and Surround-Sou...oring options for LV5770
Leader Instruments brings...legalEyes to the Americas