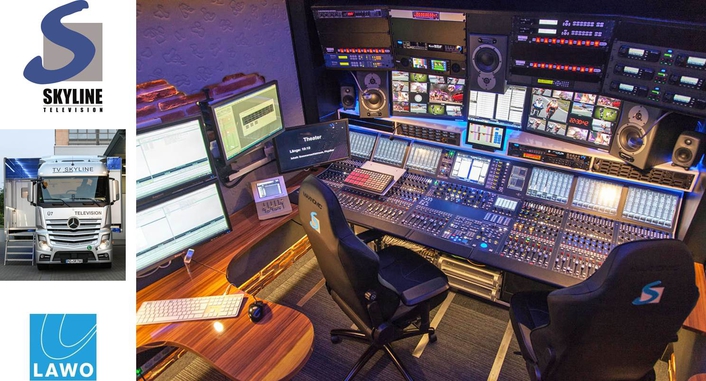 The mc²66’s HD core provides a routing capacity of 8192x8192 crosspoints
TV Skyline’s new Ü7 OB truck took to the road on 1 May – with a host of state-of-the-art Lawo equipment onboard. This unit is the latest addition to the facilities operated by the Rhine-valley-based production company, and sets new standards in design and workflow for high-end OB trucks.

The Ü7 is fully equipped for high-quality operation on ambitious productions with three studio control rooms and up to 32 workplaces. The audio area occupied by the Lawo mc²66 is perfectly suited to the live broadcast of big sports events and music festivals in 5.1 surround, and can also handle parallel production of stereo material. The mixing crew can follow the 5.1 production in four rooms with surround monitoring.

“An mc²66 mixing console was installed in our Ü5 OB, which was completed 2006, and we have had only positive experiences with it,’ says TV Skyline founder and CEO, Wolfgang Reeh. “It is very stable in operation, provides optimal functionality and is reliably doing its job. Another reason for our choice is that Lawo constantly develops and advances itself and its systems. With the current generation of the mc² mixing console, Lawo has brought a high-quality and ergonomically optimized product to the market. With the functionality of its console core and DALLIS I/O system, it allows signal processing to a high level.”

The mc²66’s HD core provides a routing capacity of 8192x8192 crosspoints. It offers 144 DSP channels in recording mode and 288 DSP channels in the broadcast mode, plus 28 MADI ports. The system’s DALLIS stageboxes are connected via fiber-optic lines, and uses redundant power supply units and DSPs.

The 16.6m, 38 ton Ü7 trailer is fitted with one movable 1.60m side and two 60 cm drawers on the other – one of these houses the audio control room. Its acoustic environment is designed for optimum listening with regard to equipment placement and the positioning of the monitor loudspeakers – a 5.1-channel setup with digital Dynaudio Air speakers, plus a K+H system, with Wohler audio control. The abundantly equipped area is able to handle multitrack recordings of up to 256 channels, with processing and limiting from TC Electronic. The truck’s silent air-conditioning, fabric-lined walls and carpet, together with the ergonomic overall design of the room – which also has a “tonmeister workplace” – is optimized for the highest levels of technical and artistic production.

One of the three control rooms is accommodated in an auxiliary truck dedicated to the Ü7, another 16.6m, 29-ton heavy trailer that offers an additional multi-function cabin.

According to Wolfgang Reeh, these three control rooms are an important consideration in the future applications of the Ü7: “For sports events, that the host signal is typically created in one control room, with a second and third control room needed to generate the unilateral feeds with highlights as well as edited versions of the programming,” he says.

When designing the OB van, TV Skyline took completely different approach in determining the demands: “The reason why the Ü7 OB truck is so different from our other OB trucks is that it is based on two-year long observations regarding the requirements of the marketplace and of our company,’ Reeh explains. “Thus we devised a new room concept with up to 32 workplaces, and a technical infrastructure and ambience that translates our ideas on the future of production. In this way, we can cover everything from soccer broadcasts to high-end classical music events.”

TV Skyline
Based in Mainz/Germany, TV Skyline is a TV and broadcast provider. Established 20 years ago, the company’s fleet of OB trucks handles the production of sports, shows and music, as well as covering corporate and other industry events. TV Skyline’s studios also handle digitizing and post production, and the company is a leading global manufacturer and supplier of special cameras.