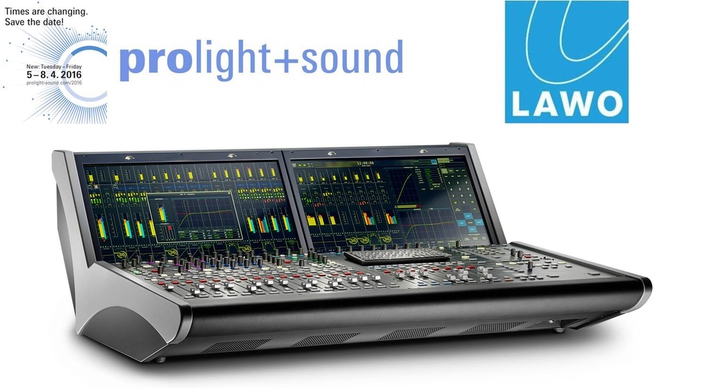 Lawo, German manufacturer of market-leading network, control, video, and audio technology for broadcast, live and theater applications, will be exhibiting at Prolight + Sound (April 5-8, 2016). In Frankfurt, Lawo will show numerous IP-based products and solutions natively equipped with SMPTE 2022 and RAVENNA/AES67 – all demonstrated in a fully-operational setup in Hall 4.1/Booth D30.

Visitors to the show can experience at first hand the mc²36 RAVENNA- and MADI-capable live performance audio console, alongside the proven mc²56 and mc²66 mixing consoles. Additionally, both V__line and A__line video and audio processing and routing devices will be showcased. Further emphasis will be placed on the VSM Broadcast Control and Monitoring System, which is currently being used in extremely demanding TV and radio productions, as well as in A/V multimedia installs.

All Lawo IP solutions are future-proof, being based on open standards such as RAVENNA/AES67, TR-03 and SMPTE2022-6/-7, and being in line with the AIMS roadmap.

At a glance: the products on display:
AUDIO Solutions
mc²36 – Lawo’s RAVENNA/AES67-based all-in-one mixing desk is built to broadcast standards, with a comprehensive feature set that is ideal for use in theaters, Houses of Worship, live and installed-sound applications.

mc²56 and mc²66 – Proven, reliable mixing consoles with features such as mc² AutoMix, which automatically adjusts the levels of active and inactive microphones while keeping a constant ambient level – a unique and invaluable function for panel discussions and live shows. Two mc²56 consoles will be on show mirroring each other – a capability especially useful in theater applications, where it allows an mc² console to be placed in the auditorium to prepare and fine-tune the audio mix during rehearsals, with its settings mirrored the second mc² console in a control room. In this way, the show mix can be perfected without the audience present, and the auditorium console to be removed to allow space for paying visitors during performances.

Nova37 – Hybrid RAVENNA/MADI Plug&Play Audio Router, for instant set-up of small-sized audio networks with a maximum of 1536x1536 crosspoints. Connecting consoles and I/O systems via RAVENNA/AES67 or MADI, the Nova37 audio network is up and running instantly, providing immediate access to all sources. In combination with mc² audio consoles and mc² Compact I/O stageboxes, the new router offers a very smart package for live performance, installed sound, and House of Worship.

VIDEO Solutions
V__pro8 and V__link4 – Lawo’s tools for live video streaming over IP are the perfect solution to power backstage screens, allowing the cast and staff to follow scenes on the theater stage.

CONTROL Solutions
VSM Control & Monitoring System – This independent control system brings all of the devices in TV/radio facilities or A/V installations into a single, unified control environment. The ‘everything under one roof’ philosophy of VSM gives operators full control of a wide array of devices, using flexible, easy-to-use user panels and software interfaces that can be configured to meet the unique requirements of particular workflows and applications. Besides its market-leading position in broadcast environments, VSM can be found in various applications such as providing the Control System on all Quantum-class Cruise ships operated by Royal Caribbean International.