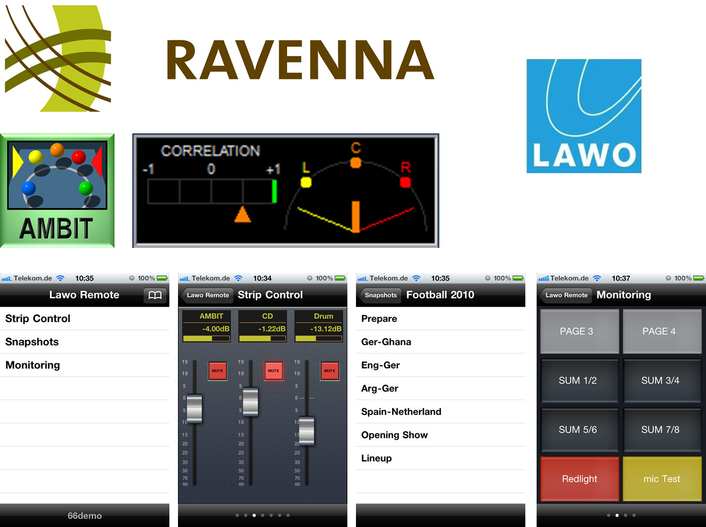 Lawo AMBIT, mc² iApp and the innovative RAVENNA technology have been presented at the IBC. A number of renowned companies cooperate in the development of RAVENNA.

The next revolution in the audio industry: RAVENNA the new solution for real-time distribution of audio and other media content in IP-based environments. In a world premiere, ALC NetworX presented this technology at the IBC 2010. In addition, visitors were able to familiarise themselves with RAVENNA at the Lawo booth; a special wall display was set up for the visualisation and demonstration of this new technology.

RAVENNA is not only suitable for the professional broadcast market but can also be used in other pro-audio fields, for example: live sound, fixed installations and recording. Fields of application include flexible setups at venues and live events, OB van support etc., as well as in-house signal distribution in broadcast centres, theatres and music halls, as well as WAN connections. Thus RAVENNA will establish a completely new way of handling audio, allowing for faster and more flexible workflows.

All protocols and procedures used by RAVENNA are based on widely distributed and established IT and audio methodology.

RAVENNA is an open technology standard. This is why Lawo has decided, along with other well-known companies, to support this new technology. Other companies that are first in line to take up the RAVENNA technology are Merging Technologies, Innovason, DirectOut, LSB/VSM Control and DSA Volgmann.

The AMBIT Upmix is perfectly suited for state-of-the-art productions, versatile in use for completed stereo mixes, on a source in an input channel or on sub groups. By the adjustment of a few, easily understandable parameters it is possible to create stunningly authentic sound spaces, and build a perfect 5.1 image, that envelop the listener completely.

Thanks to innovative parameters such as ‘Auto-Centering’ for the front channels, the AMBIT Upmix algorithms are also capable of adapting to the most diverse source material, and offer stability when panning the original image. All the AMBIT parameters are stored in production data and snapshots. AMBIT is fully downmix compatible.

The AMBIT facility will be included in the mc² 4.12 software release. Expected availability is by the end of December.

Everyone has heard of apps – but this app will really make you prick up your ears: the Lawo iPhone Remote app, a free app for the iPhone that enables remote control of a mc² series consoles and the Nova73 HD routers. This year’s IBC witnessed the launch of the Remote app, which allows you to operate every fader on a mc² console. The app follows the mixing console’s layout, and a simple ‘swipe’ will navigate you from left to right of the control surface.

Load snapshots when you want from the snapshot folders – a feature that makes the Lawo Remote app the ideal tool for production preparation, as well as theatre rehearsals. Special user buttons that appear only on the iPhone app can be assigned from the mxGUI using the same CustomFunction that is used for the console’s user buttons. This makes it possible for the iPhone to act, for example, as a monitor panel for the director, or as a remote control for a GPI.

The Lawo Remote app will be available, free of charge, from the Lawo App Store by the end of 2010.