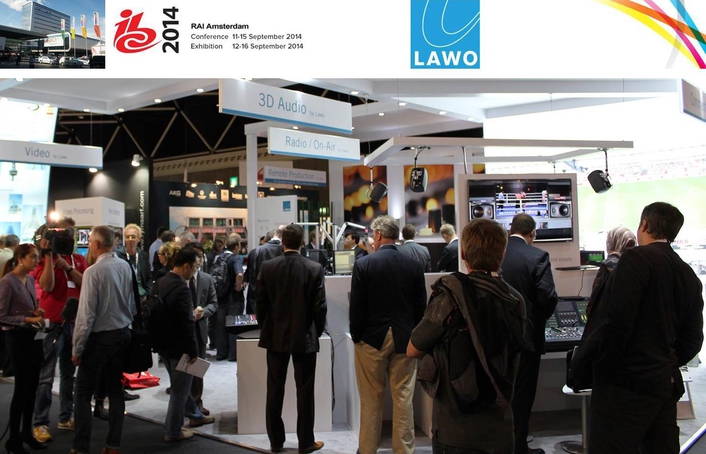 ... and to present its video and audio remote production technology on 8.B50
Showcasing new and innovative products and technologies as well as proven devices, Lawo (Hall 8, Booth B50) will use this year’s IBC to address audio and video broadcast, software solutions and workflow optimization issues

Launch of Lawo’s new audio mixer
A world premiere to be held on Friday 12 September 2014 at noon will present the IBC audience in Amsterdam with a brand new audio mixing console that extends Lawo’s application range and rounds up the company’s product portfolio. This addition to the product family boasts high performance and a new face, with an advanced feature set based on proven Lawo technology. It is, in the company’s words, “simply unbelievable”.

New crystal radio console
The new crystal radio console offers a cost-effective entry point into the Lawo world of mixing, bringing comprehensive out-of-the-box functionality plus all of the flexibility and customizability for which Lawo is renowned. crystal has a re-designed user surface in an ultra-slim chassis and a new ergonomic handrest. The updated crystal base unit features power supply redundancy and optimized expansion slots for easy addition of I/O cards. crystal consoles offer seamless integration with leading radio automation systems, including ENCO, RCS, Dalet and Radiomax. The touchscreen-optimized VisTool PC software provides additional functionality and visualization beyond the limitations of hardware user interfaces, e.g. of DSP parameters, signal levels, and the snapshot database. Accompanying the hardware console is the fully touchscreen-based crystalCLEAR virtual radio mixing console, bringing the crystal product line to applications where no physical faders are needed.

Proven Lawo mixing consoles
Also on show will be the mc²56 and the mc²66 audio mixing consoles in different frame sizes, providing features including advanced AutoMix, which enabled the production of 32 feeds from just two operators at the recent Brazil football event.

Lawo Commentary Unit (LCU)
Lawo’s RAVENNA-based commentary solution is dedicated to use in world-class sports and cultural event broadcasts, including this year’s broadcasts from the Brazil venues of the world’s most prominent football contest. It is tailored to the needs of today’s live broadcast productions and offers all modules for a comprehensive commentary system from a single source.

Lawo Video Hub based on V__link4
Lawo will demonstrate a fully working IP-based stagebox solution for video, audio, intercom and control at IBC. The system is based on Lawo’s new V__link4 video-over-IP interfaces and can operate in local stagebox applications (e.g. an OB truck) as well as in IP-based remote productions. The example stageboxes being shown include Lawo’s V__link4 video-over-IP interfaces, Clear-Com and Riedel intercoms, Ikegami CCUs and cameras, and a Lawo RAVENNA I/O interface. The principal concept behind the IP-based camera hubs is to move the camera CCUs from the truck into the stageboxes. These hubs are connected via IP to the truck, providing a “one cable into the stadium” approach. Video, audio, communications and camera control data are transported via IP, which significantly reduces cabling and increases the flexibility of any installation by real IP networking. In addition, this approach decreases complex setups of the hardware involved in a truck. The truck’s camera equipment can be easily adapted to changing applications, e.g. by moving camera hubs and cameras from one truck to another without effort.

Lawo’s V__link4 is a compact 1RU device, designed for production-quality real-time contribution and distribution of 3G/HD/SD-SDI signals via IP networks.