Brett “Scoop” Blanden, FOH, and Peter Bowman, monitors (l/r)
Lady Antebellum continue to build on their success with seven GRAMMY Awards, platinum-certified sales and their TAKE ME DOWNTOWN TOUR, which stops at nearly 80 cities across North America. The Nashville-based trio insists on the best possible audio in all its live performances and has been an officially endorsed Sennheiser artist since 2008. Most recently, Lady Antebellum have integrated Sennheiser’s Digital 9000 wireless system into their live touring rig, enabling the band to deliver pristine wireless sound to audiences at every performance.

Now almost one month into the tour, Lady Antebellum’s front-of-house engineer Brett “Scoop” Blanden reports that the Digital 9000 system has been performing flawlessly, delivering the pinnacle of audio quality and reliability night after night: “Things are going really well,” he says. “Sonically, since there is no companding in the microphone, it sounds far more like a wired mic than any other RF microphones.” 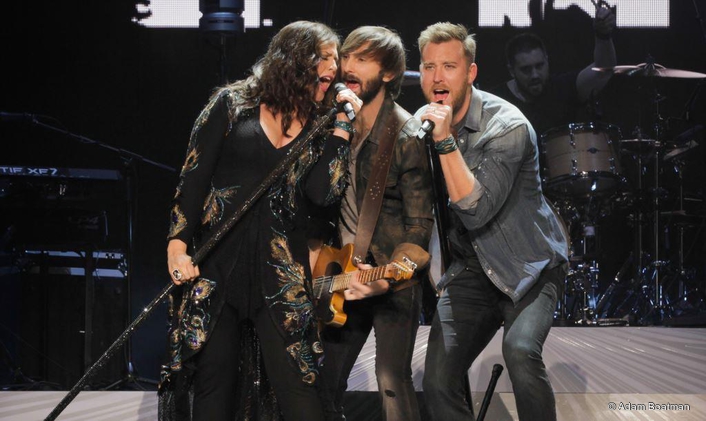 Currently, Lady Antebellum’s production team is using eight channels of Digital 9000 – the only microphone system that is able to transmit uncompressed audio in the UHF range, allowing for full HD sound.

According to monitor engineer Peter Bowman, channels 1 and 2 are allocated to Hillary Scott (lead vocals) and Charles Kelley (lead vocals). Dave Haywood (backing vocals) has three wireless microphones throughout the stage to accommodate his playing an assortment of instruments, which includes electric and acoustic guitar, mandolin, banjo, bouzouki, and piano. Each vocalist uses the SKM 9000 handheld transmitter coupled with an MD 9235 capsule. Channel 6 is currently being used for production/spare, and channels 7 and 8 are allocated for Lady Antebellum’s guest artists, who are also singing through SKM 9000 handhelds with MD 9235 capsules.

Bowman has been very pleased with the reliability and RF performance of the Digital 9000 system: “The range is very good. I have walked the hallways in the back of the arenas and since it’s digital RF there is no loss of signal quality – even when you are hundreds of feet away. We start each show in the back at front of house, so having this range is very important to us.” 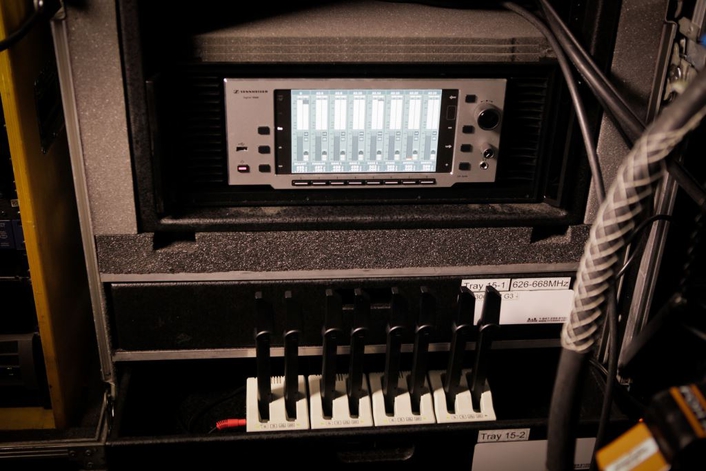 Digital 9000: opening channels of communication
Lady Antebellum are using a special version of the SKM 9000 transmitter with a built-in command function. On the SKM 9000 COM, users can disengage the microphone channel and engage a talkback channel that may be assigned to an engineer, for example. “This has worked great for several of our artists,” says Blanden. “Being able to push a button and communicate directly with a monitor engineer no matter where they are is huge. We also have both channels patched to my squawk box at front of house, so if there is an issue happening on stage I can help facilitate that request rather than making a pit stop at monitors,“ Blanden explains.

Beauty in simplicity
For both Blanden and Bowman, the ultimate goal is to achieve a true sonic representation of the source in the most efficient way possible. With Digital 9000, they are able to achieve this, both at front of house and at monitors: “The less you have to do, the better off you are,” says Blanden. “If I put up a microphone, I want it to sound like the source. This system helps us achieve a true representation of the source material out of the box.“

Bowman agrees: “Our artists are very comfortable with the sound of the MD 9235 capsule with very little EQing. These capsules and the Digital 9000 system itself gives me a true reference to what they are hearing in their in-ear monitors because the microphones sound so good just as they are. This is definitely noticeable to the artists, the production staff and of course the audience.”