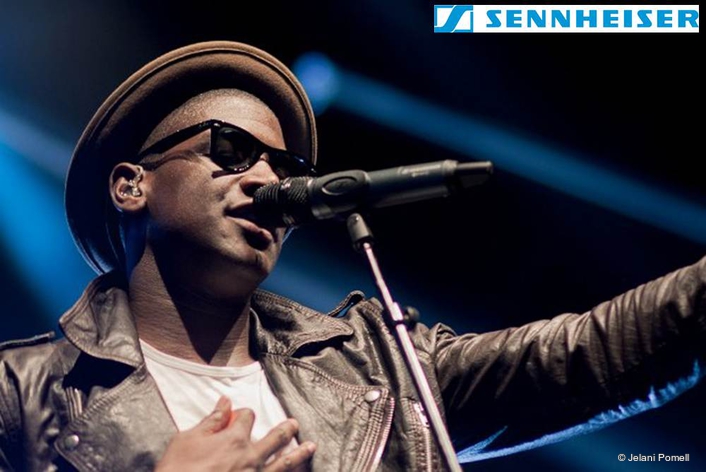 .
October sawsinger-songwriter Labrinth take to the road for an eight-date UK headline tour.Backed by a four piece band and with plenty of guest appearances, a Sennheisermicrophone and in-ear monitoring package ensured that all consistently soundedtheir best.

Labrinth is aregular Sennheiser user and played a major part in the company’s Masters ofSound competition earlier this year. Designed to encourage the best originalup-and-coming songwriters, the Masters of Sound winner, Claire-Louise Rossi,gained valuable experience by spending time with Labrinth in his studio.

Monitor engineerRoss McGroggan has been using Sennheiser equipment for a number of years and hewas more than happy to continue.

“The reliabilityand sound quality of Sennheiser equipment are second to none,” he says. “I’venever had a single problem with their in-ear systems and the 935 is anexcellent microphone. It’s really the best suited to our application - verydurable and you can get a lot out of it before feedback.”

One of thechallenges for the audio crew was a variety of special guests who featured onvarious shows, including Tinie Tempah, Wretch 32 and X Factor contestant James Arthur.

“Accommodatingthe guests was no problem,” says Ross. “I had a guest mix set up which cateredfor them all - I’d just put a wirelesspack on them and give them a 935. We weren’t able to soundcheck with some ofthem, but with the 935 you know exactly what to expect. We also used our micsfor the support acts and never had a problem. It all went very smoothly.”

“We use what thesound team and Labrinth prefer to use and Sennheiser is consistentlyexcellent,” adds tour manager Dan White. “Ross and (FOH engineer) Ricky arehappy with them. Sometimes Lab comes out the front at soundcheck and he hasalways been happy with the sound of the 935.

“Considering thesheer amount of miles that the equipment has covered, the fact that we’ve neverhad anything fall over on us is testament to its durability.”

Ross agrees,saying, “The equipment inevitably gets some rough treatment on the road and itdeals with it very well. I would never have any worries with it because, evenif there was a problem, we know that we could ring up Sennheiser UK’s PhilCummings or Mark Saunders and it would be sorted. The support is second tonone, it’s priceless.”

“I’ve had a greatrelationship with Phil for several years, he has been very helpful. You canalways get hold of someone at Sennheiser UK,” Dan adds. “There have been timeswhen we’ve had to borrow kit for guests artists or arrange loans for a coupleof days and they have never failed us. It’s really good service.“