Labrinth Makes the Earth Move with Neumann and Sennheiser 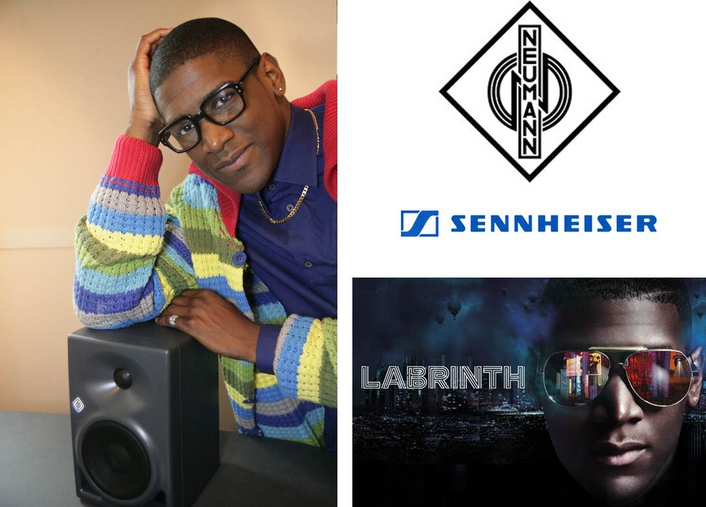 With a number of high profile collaborations to his name, singer, songwriter and producer Labrinth has achieved much in the two years since he rose to prominence. About to release his second solo single, Earthquake, Sennheiser and Neumann equipment are constant companions on stage and in his studio.

Neumann’s KH 120 active studio monitors are proving to be one of the year’s major success stories for distributor Sennheiser UK. Joachim Walker, engineer at Labrinth’s north London studio and his club DJ, heard them and urged the artist to give them a try.

“Joe instantly loved them and said ‘give them a chance’. And I thought, if Neumann makes speakers, they’ve got to be the best. So I did and now I think they’re great,” says Labrinth. “They are very clean and smooth, but quite punchy - you get a lot of bass out of them, which I didn’t expect because they are so small!”

He continues, “One of the things I really like about them is that they complement other speakers well, so you can balance between the two. They give me a different perception of a mix - almost a stereo, Hi-Fi mix of what I’m producing - and I like the idea of that. They pleasure your ears, let me put it like that.

Another advantage of the KH 120s for Labrinth is that the illuminated Neumann logo doubles as a status indicator and alerts users to when the comprehensive protection systems are active.

“We love the illuminated logo, because we turn everything up so loud in this studio and blow up so many speakers,” smiles Labrinth. “Most speakers of that size don’t have the indicator light, so we find it very useful.

“They are also easy to set up, you just plug and play. I think they fit in the studio really, really well.”

“I’ve been working with Labrinth about a year. When I started he was using in-ear monitors, but none of the other band members were. Sennheiser G3 is my system of choice and we pushed to get everyone using them. They took to them straight away,” he says.

Labrinth has been using an e 935 wireless vocal microphone for some time and Ross was happy for him to continue.

“He was using it before I was involved and I like it myself. I think it is suited to his voice and we both get everything that we need out of it. We’ve never had any issues with the Sennheiser gear. It’s stable, solid, very reliable and there’s plenty of clarity and warmth there.”

“The 935 is just the mic we need for Lab,” adds his Front of House engineer, Noel Ricketts. “It is easy to work with and captures the crisp high end, which puts him in control of his performance.”

Tour Manager Dan White concludes, “It’s been great working with Sennheiser. Phil Cummings [Sennheiser UK Project Manager] has been extremely helpful and the live tour has gone really well. There have been some last minute requests for Lab special events and photo shoots where we have needed to have kit couriered in, but nothing has ever been too much trouble.”