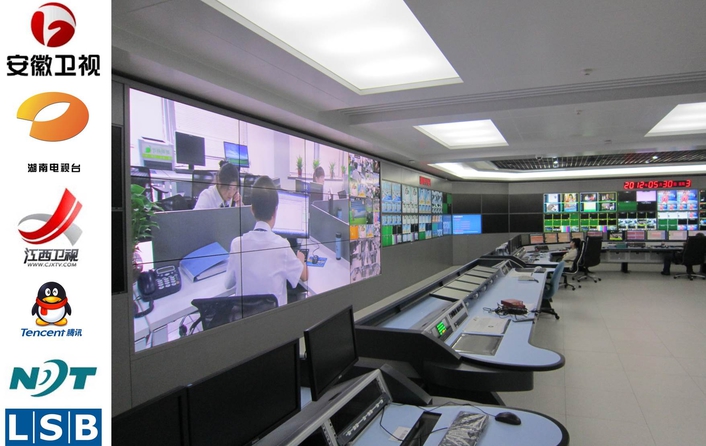 Hunan TV, Anhui TV, Tencent Sigma Studio Group and Jiangxi TV using the VSM Control and Monitoring System in Studios and OBVans
L-S-B has strengthened the market position of its Virtual Studio Manager (VSM) in the People’s Republic of China with several new installations and projects. Over the past year L-S-B has worked in partnership with exclusive distributor, NDT, to equip both studio facilities and OB vans with its high-performance VSM system. VSM is an IP-based control and monitoring tool and all these projects have benefited fully from VSM’s flexibility and simple operability for everyday requirements in addition to the independence it brings from hardware manufacturers.

Hunan TV
Hunan TV has become established as the leading Chinese entertainment channel. This Chinese broadcaster is using VSM in two new projects: its new HD 12OB Van and a new 1,400 m2 studio complex. In HD 12, the VSM system controls a whole range of Evertz equipment including an Evertz xenon video-router, Evertz HD2012 video converters and frame synchronizers in addition to an Evertz VIP/MVP multi-viewer system. The replay area is equipped with EVS XT Nano servers and a Telex Cronus 32x32 acting as an intercom system.

For Hunan TV’s new 1,400 m2 studio, a redundant VSM server cluster was equipped providing total fail-safe operation. In addition numerous hardware panels were incorporated. These have freely-configurable LCD buttons which are able, for instance, to trigger a number of events with one press of a button. VSM is also used as the primary Tally system for the studio and includes several hardware UMDs with dynamic labelling and Tally information.

Anhui TV
A further project implemented successfully in 2012 was to equip Anhui TV’s new studio building. Anhui TV is a regional broadcaster in the east Chinese province of Anhui with satellite based channels and a full programme schedule. The new studio complex consists of two studios (1,000 und 1,200 m2), in which VSM acts as a universal control and monitoring system with redundant servers.

In the video area the VSM controls an Evertz xenon router, 2 Sony MVS 6500 video mixers in addition to an Evertz VIPX multi-viewer system. The VSM system is tasked amongst other things with labelling the components and operating as a tally system. Using the VSM system in the two studios provides ultimate flexibility in terms of resource planning. The ‘boxing’ function makes it possible to store and retrieve complete production set-ups. Ultimately this ‘packaging’ of resources in virtual environments means that whole productions can be transported from one studio to another and all with the press of a button. This function provides a powerful disaster/recovery system ensuring total production security.

Tencent Sigma Studio Group
Tencent is one of the biggest Chinese content providers on the Internet with its own service portal. In 2012 it commissioned NDT to plan the Sigma Studio Group project and provide all the technical equipment. The project consists of five studios and an EFP unit (electronic field production). The studio complex was used for the first time in 2012 to broadcast the Olympic Games from London. In the studios the VSM controls both the audio and video equipment. A Sony 7000 video mixer, a Sony HSC-E80 HD camera and an Evertz video router are used in the video area, while additional equipment includes an EVS server in the replay area and a BMD VC80 as a format converter. A TELEX system serves as intercom system.

Jiangxi TV
Jiangxi Television is a broadcaster in the east of China that currently operates five studios and offers a full schedule of programming. To expand its fleet of OB Vans a new HD 2 OB Van was commissioned. The VSM system controls all equipment in the truck. Evertz hardware is again used: an Evertz xenon router, Evertz VIP/MVP multi viewer, Evertz HD2012 frame synchronisers and converters. EVS XT nano servers are used to operate the replay area and these are also controlled by the VSM. The IP-based structure of the VSM system provides maximum flexibility and ensures rapid reaction times in daily operation. Easy configuration and openness towards the equipment of third party manufacturers enables the VSM system to meet the changing demands placed on the HD 2 OB van in ways that save time and money.