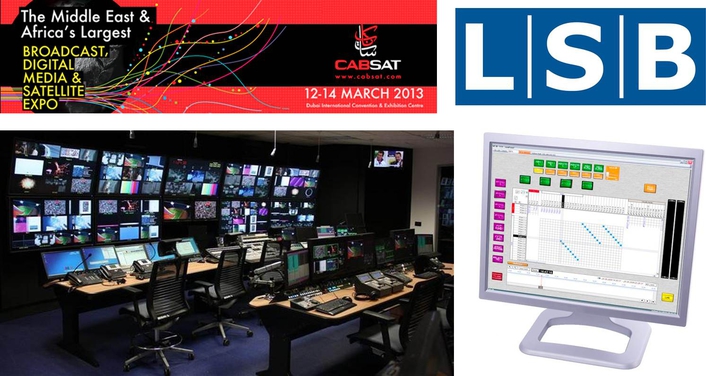 Visit L-S-B Broadcast Technologies at Cabsat (12 to 14 March 2013) in Hall 7, Stand 720, and see the possibilities opened up by
L-S-B Broadcast Technologies will be present for the first time with its own booth at Cabsat 2013 in Dubai from 12th to 14th March 2013. Showcasing the company’s Virtual Studio Manager (VSM) product, the focus of the presentation (Hall 7, Stand 720) will be its unique ‘Boxing’ functionality. In addition a number of the user interface possibilities will be on show including both touch screen and hardware panels and additional features such as Unicode support and RFID tag functions.

Based in Wiesbaden, Germany, L-S-B Broadcast Technologies GmbH is the leading manufacturer of control systems for radio and television applications, VSM is an IP-based control system that works independently from all broadcast hardware manufacturers. Thus, it is easy to integrate VSM into existing or new infrastructures to maximise the flexibility of resources and streamline and simplify operational workflows.

The presentation at Stand 720 in Hall 7 of the Dubai World Trade Centre will spotlight the following VSM features:

Boxing
Maximising the flexibility of available studios, control rooms and production areas in a facility is key to maximising the investment made in both real estate space and technical hardware. ‘Boxing’ provides the logical framework to dynamically save and store multiple device set-ups and then transfer the complete settings to another production area or studio with a single button push. Any available studio now becomes a backup for a production even if equipment is different – the ultimate disaster/recovery solution. In addition, an available studio can be used to prepare a production which can then be recalled to any other in the studio cluster with the single push of a button!

Touch
The complete video, audio and intercom workflow can be controlled and processed via tablets. Modern workflows must be flexible and cost-effective. The Virtual Studio Manager has exactly the right tools to meet these demands on modern user interface platforms. Thus, standard touch screens or tablets can be integrated into the production and studio environments.

Unicode
Arabic characters can be shown on all displays, modules and hardware that support the Unicode standard.

RFID tags
RFID tags can be used to call up individual user interfaces saved beforehand and the user has the opportunity to define access authorisations to a panel.

L-S-B Broadcast Technologies GmbH, Wiesbaden, is the leading manufacturer of control systems for radio and television production. The company’s core product is the IP-based Virtual Studio Manager (VSM), a universal control system. As a single-source solution, VSM works independently of any single manufacturer and thus represents a flexible and powerful answer to technical challenges in the fields of production and broadcasting. Founded in 2003, L-S-B Broadcast Technologies can draw on an excellent worldwide sales network. A staff of 35 at Head Office in Wiesbaden is responsible for management, project implementation, services and software and hardware development.