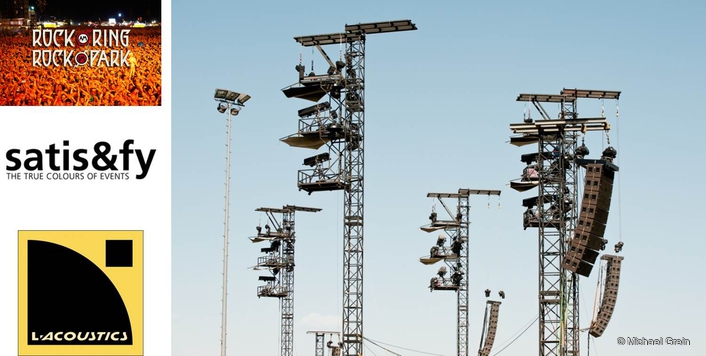 satis&fy AG provide impressive L-ACOUSTICS system for popular outdoor music festivals in Germany
The Rock im Park and Rock am Ring festivals are the most popular music festivals in Germany, attracting an audience of 150,000.  The two festivals are held simultaneously in Nürburg and Nuremberg, in the West and South of Germany. The events each boast an almost identical artist line-up, with headliners this year including Metallica, Linkin Park, Iron Maiden, and Kings of Leon.

Both concerts are outdoors, but pose unique challenges for sound crews.  Rock im Park’s Zeppelinfeld has neighbouring residential areas so sound restrictions are a big consideration.  Rock am Ring takes place at the world-famous Nürburgring racetrack, a narrow and very long audio field that requires a powerful, directional PA system to deliver the best coverage for an extended audience.

For Rock im Park promoter Marek Lieberberg, noise control was the key hurdle, as complaints from neighbours in past years had led to headline acts being restricted to 96dB at FOH. “There have always been issues with noise pollution at Rock im Park, and the council threatened to revoke the festival's permit, so in previous years sound was dialled down so much that the audience complained it was too quiet!” explains Johan Schreuder, Rock im Park sound engineer. “Traditionally, the bands get a contract where it says they are allowed 96dB over a 10 minute period, which is really conservative for a rock show. They asked me if I could have a look at a solution to the problem, and using L-ACOUSTICS, we were able to raise that to 100dB over 10 minutes. This was down to the system design – the rear rejection of the L-ACOUSTICS system; and the fact that we included many measures, such as making sure the monitor sound stayed 'on the stage' by closing the loading dock, and covering the stage walls with sound absorbing material. We even went as far as to make sure that vendors on the field would position their sometimes very big stands in such a manner as not to create too many reflections in the wrong direction.”

Because the venue is essentially a very wide field, with the mix position off to one side, Schreuder opted for a L/R four- hang system with 12 K1 per hang. As the venue is diamond shaped, L/L and R/R stacks were also positioned at 25m from the main PA, pointed directly outwards to the audience, not to the sides of the park. Fourty-eight SB28s, and 52 VDOSC enclosures were used for five delay towers, spread into two rows. 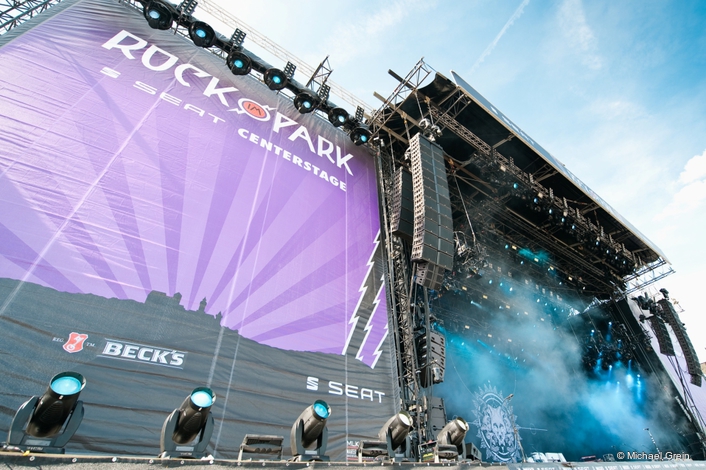 “Instead of using a classic large PA system to cover the entire audience, we divided the audience into smaller sections and deployed smaller systems,” explains Schreuder. “This allowed us to ease up on the low sub capabilities of the system, meaning we didn’t have to get too loud in the farfield. Then, we put up the first row of V-DOSC delays about 20-30 metres closer to the main rig than normal, raising them up and pointing them downwards to decrease noise overspill. Our SB28s were set up as cardioid to avoid the low frequencies infringing on the dBa ratings. We did a lot of measuring, and we discovered that if we let up on the bass, we were able to get quality sound without exploding the permit level.”

In Nürburgring, Rock am Ring provided some totally different challenges. In a less residential area, noise was less of a problem, however, the venue is a massive race track requiring coverage amounting to 280 metres in length and 60 metres wide… a huge area to cater for. “It's a narrow audio path, and obviously very long, so we put up a throw arrangement: a L/R system with four K1-SB on top, which increases the height of the array, and allows greater energy to the back. We then had four V-DOSC arrays. K1 is just phenomenal, and has more dynamics and more low end in the backfield than any other system,” reveals Arnd Wagner, long-time sound designer for Rock am Ring. “Because of K1's power and accurate long throw, we didn't need our first delay line until 75 metres; and then we had the rest positioned every 80 metres in stereo mode, until the end. V-DOSC gives you the low end in the delays too, so provides a consistency in sound – it's such a versatile box. For the sides, we opted for six KUDO.”

Like Rock im Park, a cardioid bass setup comprising 48 SB28s was also chosen for Rock am Ring, configured in simple stacks of four, across the front of the stage.  “The great thing about the SB28s is that they're so easy to stack. We have 12 points where the subs are spaced 70cm apart with a little arc delay, this way, everything comes out the middle, which guaranteed perfect low end coverage throughout,” Wagner explains. “There are other good systems out there, but I have always preferred the L-ACOUSTICS stuff for its reliability, flexibility, and a guaranteed even coverage. The kit is easy to work with, and you can add groups really fast. Also, the software is very simple, which makes tuning quicker and easier, and it's always 100% accurate. There are no other loudspeakers that would do the job as well as they do.” 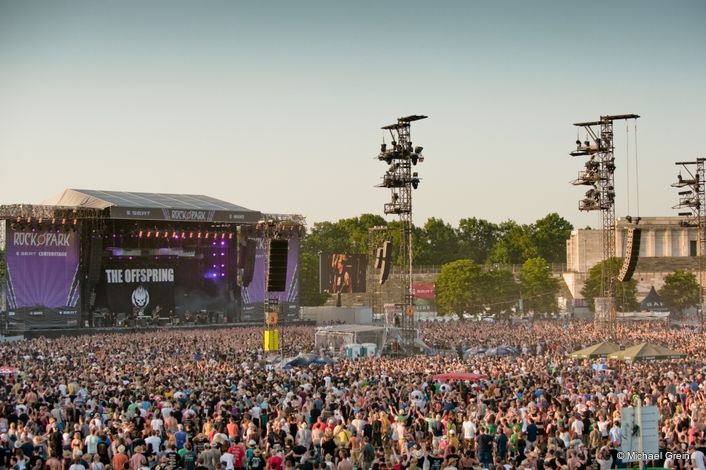 A. Fozzy Ehmann, of festival organizer MLK concludes, “For years, we had problems with the local authorities due to noise spill in surrounding residential areas at Rock am Park. Thanks to this L-ACOUSTICS sound system and its design, we were able to bring rock and roll back to the city of Nuremberg, and give the audiences at both Rock am Park and Rock im Ring the quality and level of audio they are entitled to in a rock show of this stature.”