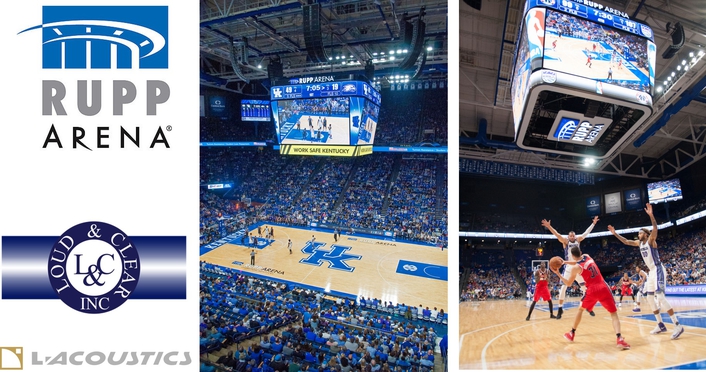 “It’s big.” That’s the reaction of many the first time they enter Rupp Arena, the 24,000-seat centerpiece of the Lexington Center, a convention and shopping facility in downtown Lexington, Kentucky. The facility is home, appropriately, to the Kentucky Wildcats, the University of Kentucky’s men’s basketball team that is first in the nation in home attendance.

The arena, which dates to 1976, got through the last 40 years with sound from “Big Bertha,” a massive cluster-speaker system hung above the center of the arena. Big Bertha was appropriate for its era, but as part of an ongoing $15-million renovation that also saw a new video scoreboard installed, Rupp Arena now has a new sound system that’s also commensurate with its standing and its time. The largest L-Acoustics K2 sound system ever used as a fixed installation also brings tour-level audio that lets Rupp Arena accommodate many more events, such as concerts, using its own sound.

The system consists of six K2 arrays: two 13-box K2 arrays covering the East and West sides of the venue, with four 12-box K2 arrays covering the corners. The corner arrays also have four L-Acoustics K1-SB subwoofers flown behind each of them. In addition, 12 ARCS II enclosures are hung underneath a new video scoreboard to cover the court below, while another set of six ARCS II are used as delay speakers for the uppermost six rows of the arena. Finally, 38 ultra-compact 5XT speakers are used as under-balcony fills. The system is powered by a combined total of 40 LA8 and LA4X amplified

“Big Bertha worked well enough for its time and it was actually going strong right up until the very end, but it was clear that it was time to upgrade the arena’s sound,” says Stoops. “It gave us decent coverage, but we needed the dynamics and frequency response of a modern system, to be able to reproduce music.”

Rupp Arena’s staff is no stranger to L-Acoustics; they’ve had a Kudo system in the Lexington Center’s 1,000-seat theater for the past eight years, and they own a small portable Kara system for the complex’s convention center. 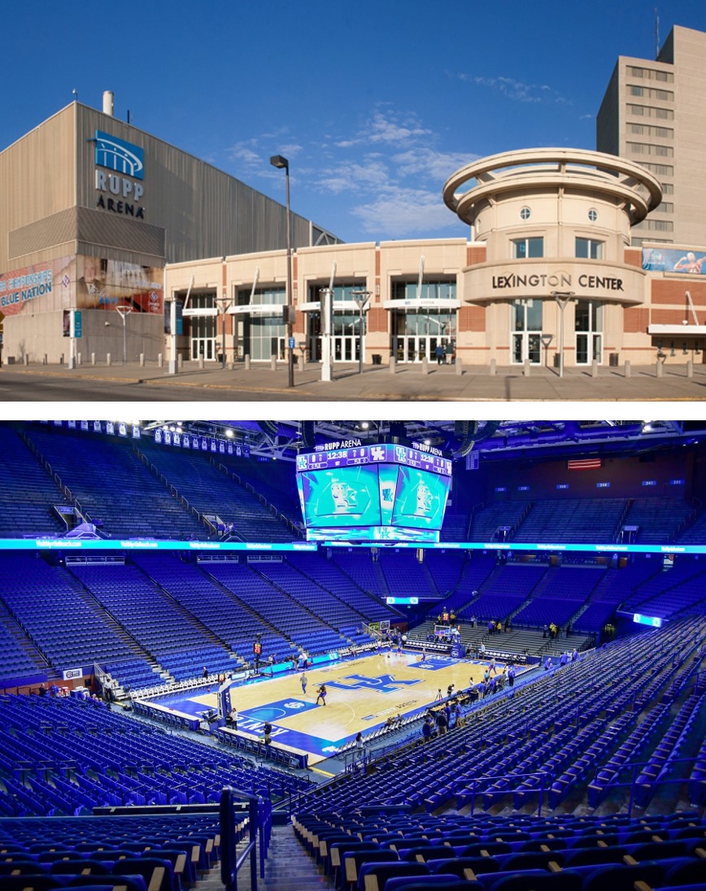 In addition, a K2 system was brought in last year as part of “Big Blue Madness,” an event held there to mark the start of the 2015 NCAA season. That system, rented through Sound Image, was configured almost exactly as what would become the final system design, which gave them a preview of what the K2 system could do for the arena.

“It sounded fantastic, so we knew we were on the right track,” says Stoops. “We knew we needed a system that would give us the sound quality you’d expect from a touring system but that would also give us the complete coverage we needed throughout the venue. The K2 has great pattern control, and we now have seamless continuity from section to section of the entire seating area. The K2 installed is really the best of both worlds.”

Richardson, who has been with Rupp Arena and the Lexington Center complex since 1976, echoes that sentiment. “Several years ago, when we were looking to update the loudspeakers at the Lexington Opera House, we critically listened to all of the major systems on the market, and L-Acoustics was by far my first choice,” he says. “Their sound was simply the most natural, both for music and vocals. Even in a very different environment like Rupp Arena, L-Acoustics has once again proved to be the right choice and our fans are enjoying the new sound very much.”

The new system has one more design aspect that further enhances Rupp Arena’s marketability for event production. The speaker arrays and amplifiers, which are mounted in LA-RAKs on the catwalk above the floor, can be moved to allow the speakers to accommodate other types of events, such as concerts. Music is critical to Rupp Arena’s legacy—over the years it’s hosted shows by the Rolling Stones, Bruce Springsteen, Bob Seger, Whitney Houston, Paul McCartney, Elton John, Billy Joel, Conway Twitty (a dozen times) and Garth Brooks, whose four concerts there in 2014 sold a record 70,500 tickets. “Making the system flexible in its configuration was always part of the strategy,” says Stoops. “It’s just one more reason we went with the K2.” 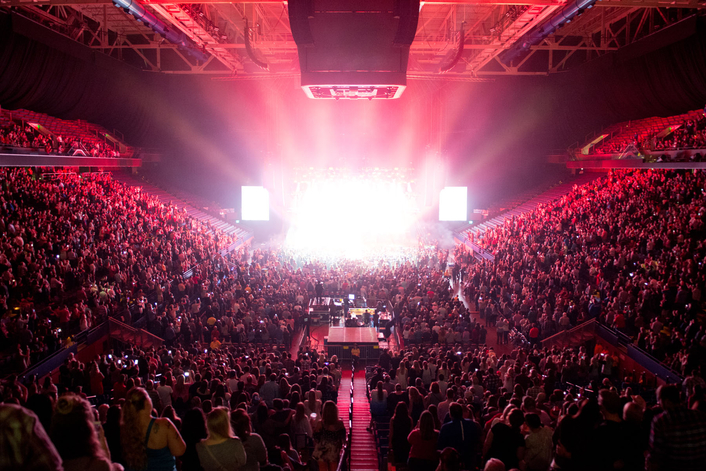 The centerpiece of the Lexington Center, Rupp Arena can accommodate 24,000 fans of basketball, concerts and other large-scale events

“The design of the system was intended to be multipurpose; they can lower two of the four corner PA hangs and the side hangs and move them to one end of the venue to create a concert configuration, leaving the other two corner hangs as delays,” explains Joe Deavers, Loud & Clear’s installation manager, and the project manager on this installation, who also credits the Rupp Arena staff’s expertise for how smoothly the project went. “They can also move it into another area of the Lexington Center, such as the convention center. It’s a highly flexible design and that’s made possible by how flexible and adaptable the K2 system is.”

Eric Cimini, Loud & Clear’s production manager, echoes that assessment, underscoring how important that kind of flexibility is for multipurpose venues such as this. “That adaptability was a huge selling point for the K2,” he says. “They can reconfigure the system in any number of ways, which greatly increases its value to them.”

Looking at the project in retrospect, Deavers notes that while the venue was exceptionally large, it wasn’t a matter of simply putting a big sound system in. “It needed a well-engineered system,” he says, “and that’s exactly what the K2 is.”

About L-Acoustics
Founded in 1984 near Paris, France, L-Acoustics is a leading manufacturer of turnkey solutions for the professional sound industry. With 320 team members, 20 percent of whom are dedicated to R&D, L-Acoustics is present in over 75 countries either through subsidiaries or via a network of certified distributors or providers. Recognized throughout the industry for pioneering the modern line array, L-Acoustics offers a total system approach for both the touring and fixed installation markets, and a product line responding to the needs of venues from the most intimate club to the grandest arena. L-Acoustics sound systems can be heard in places like the Hollywood Bowl, the NBA Houston Rockets Toyota Center, or the Philharmonie de Paris. L-Acoustics solutions have been used at seven of the world’s ten top-grossing festivals*, the London and Sochi Olympics, and on the Foo Fighters Sonic Highways World Tour, among others.