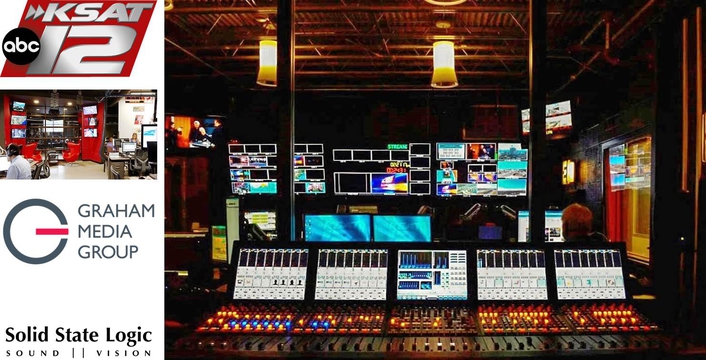 “The sound quality is impressive, and the dynamics processing is more natural sounding than others we have tried”

The station broadcasts almost 40 hours of local news from its main facilities, along with the daily hour-long SA Live entertainment show from a remote studio. Jason Hernandez, KSAT's lead Broadcast Engineer for the C10 project, explains that the new console has replaced an older installation and was chosen to complement a rethink of the station's technical infrastructure: "We were able to cut down and consolidate a lot of the support cabling associated with discrete audio connections. We did this by going embedded with a lot of our sources - directly interfacing with our HD video infrastructure and connecting the SDI feeds directly into the C10 via SSL Network I/O. We do also have a mixture of AES and analogue discrete I/O, using SSL Alpha-Link Live-R units, plus the Alpha-Link 8RMP mic preamp."

The station has also successfully tested a Dante link from its remote studio via an 80GHz microwave link using the SSL Network I/O: SB 8.8 Stagebox (eight analogue in with remote control preamps, eight analogue out): "We have an IP network connection from here to that studio over the microwave link," explains Hernandez. "At the moment we are submixing with a smaller console, and beaming it back, mixed, but we are planning on using the Dante box at the studio end. We were testing it when the SSL engineer came down to commission our system. He and I walked the box out there, plugged it in, and it worked perfectly..."

On the rationale for selecting the C10 console itself, Hernandez says he prioritised the console's audio performance: "The sound quality is impressive, and the dynamics processing is more natural sounding than others we have tried. We really like the Dialogue Automix, as well... SSL's version is more customisable - especially when it comes to the priority levels for each fader"

Freely assignable per channel, Dialogue Automix assists with management of multiple live mics so an operator does not have to continually ride their individual faders. The system detects and crossfades between microphones that are receiving an input, and the overall gain of multiple active channels is automatically adjusted to the equivalent to a single channel. A Weight control lets the operator establish priority for individual microphones.

Frank Daniels, the Chief Engineer at KSAT, explains that the C10 and SSL network technologies were not part of initial considerations: “Our original plan was to replace our audio console with the newest version of what was already in place. After some conversations with our CTO Michael Englehaupt, we decided at the last minute to have an SSL Demo here at KSAT.

“This was a smart decision as we learned about some of the capabilities that SSL could provide that would make our audio plant more efficient. The demo was set up quickly and convinced us that we had the right audio console to meet our current and immediate future needs as we transition to a more IP based infrastructure. Thanks to SSL for making it easy to ‘pivot’ and embrace their technology in our station.”

For the station's live newscast production, the C10 is controlled from KSAT's automated production room using Sony ELC automation. "We use ELC to control our video switcher and of course our audio mixer - which in this case now is our C10," explains Hernandez. "It works perfectly... And the transition between the old console and the SSL was seamless."