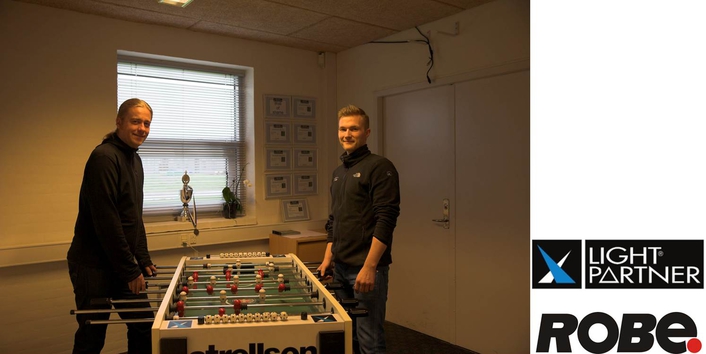 Kristoffer Nielsen is a lighting designer based in Herning, central Denmark who also runs his own rental company, Lystek.dk as well as being the proud owner of around 50 Robe moving lights, which help ensure that his creative work stays fresh, dynamic and interesting.

His design-based approach has gained him a lot of work in the genres of theatre, musicals and opera – from runs at specific venues to touring productions - an active and buzzing scene in a country with a performance-loving population. Many productions circling the country will have a semi-professional cast and a professional technical crew and a typical touring run lasts around 6 weeks and visits a series of theatres and arts centres with capacities between 300 and 1600.

“So scalability is fundamental to any touring lighting design” explains Kristoffer, and a parameter that led him to invest in the 8 x Robe MMX Spots, 12 x LEDWash 600s, 24 x LEDBeam 100s and 8 x CycFX 8s.
It’s a large purchase for a one person owner / operator, but a decision that is definitely paying off for Kristoffer.

His first Robe purchase was around 9 years ago, shortly after starting Lystek.dk, which comprised 22 x ColorSpot 700E ATs and ColorWash 250s, and this was made after his first meeting with Robe’s CEO Josef Valchar when Light Partner – for whom he was working at the time - became the exclusive Danish distributor.
In fact he has followed Robe right from the start, initially when they were a quality OEM manufacturer for other well-known marques, before launching the ‘Robe’ brand back in 2002.

When he started Lystek.dk, there were two routes open to moving lights – one of which was going with what was a major Danish owned company at the time … and the other was Robe.
He chose Robe because he liked their attitude and because he felt the fixtures were more suited to his core business of lighting theatrical shows and environments. “They were less noisy out of the two choices,” he says.

Ten years later, it has been confirmed repeatedly that he made the right decision, especially with Robe developing its latest DL range of products for theatre applications.
Having a selection of ‘smaller-lighter-brighter’ and LED fixtures to hand has become very important for touring shows where the advantages of small size, less weight and general portability - coupled with lower power consumption - have become issues. 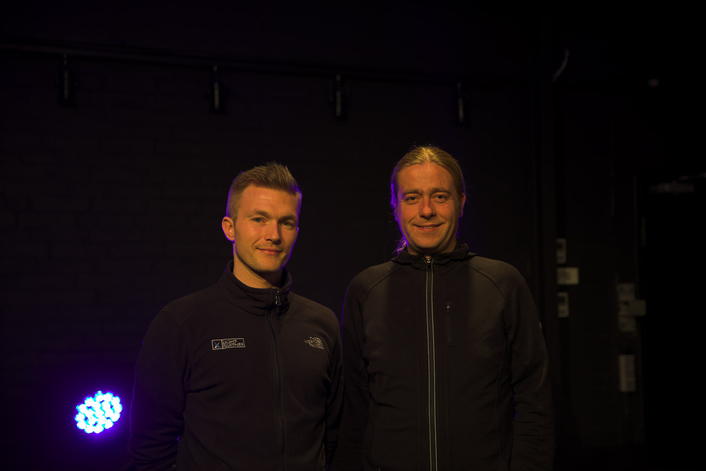 LightPartner’s Jimmy Sorensen (Technical Sales) on the left with Kristoffer

When he purchased the CycFX he knew he could use them as traditional cyc up-lighters … and since then has discovered multiple other ways that can be utilised as side, top and front effects units. “It’s an incredibly flexible unit,” he says adding that he also respects the way Robe thinks ‘out-of-the-box’ in its product development.
The MMX Spots he likes because of the compact size, and again, the light weight, while  the little LEDBeam 100s are infinitely useful for all sorts of shows, “I can rock up to the concert with 24 of them … a complete moving light rig in the back of my car!” he enthused.

“Robe has stayed ahead of the game in its LED development and I believe the colour quality of these is the best on the market right now. The colour matching between different types of Robe LED products is also excellent”.
He also highlights that the “exceptional” service and support from Light Partner has been really important in the whole company history and vital to maintaining a busy, successful and efficient business.
He programmes and runs his lightshows – which also include some concerts and band events - on a grandMA2 light console.

In spring 2016 Kristoffer will be touring with the “Fra Waterloo til Düvemåla” theatre-concert tour, a successful performance concept taking the music of a band, threaded with a loose storyline encompassing a collection of their best loved songs and hits. He wound up 2015 lighting Romeo & Juliet, a theatre-concert tour featuring 1980’s music produced by Firserne Live.
He’s also looking at Robe’s refined and powerful DL series of luminaires which are built for theatre … as well as the Pointe … so 2016 is looking like another exciting year!