Koltech is a forward thinking lighting and audio rental company based in Beersheva, Israel’s seventh largest city and the biggest in the arid Negev desert region to the south of the country.

The company is owned by Yossi Bendavid – popularly known as Zak Zak which means talkative … and he certainly is a lively and accomplished communicator – and Shlomi Auitani. The pair worked together at a previous company for several years and then set up Koltech seven years ago, both bringing experience, ambition and complimentary skills to the equation.

They wanted Koltech to become known for its standards of excellence in sound and lighting disciplines, and initially specialised in supplying technical solutions to theatre and opera productions. Their reputation soon spread along with their operational scope, and they quickly found themselves supplying concerts, outdoor festivals and a whole range of corporate and business events as well as arts projects.

They decided to invest in Robe for the first time in 2011, purchasing MMX Spots.

They already knew of the brand and its great reputation from a couple of sources including Robe’s distributor Danor Theatre and Studio Systems and also Argaman Systems, one of Israel’s largest rental companies.

At that point, they were actually on the brink of choosing a competitor product … then Robe came up with the MMX Spot which they looked at “Though it brought something properly innovative to the market, rather than just being another profile moving light!”

“The MMXs were a greater investment, however they were brighter and offered more functionality,” says Zak Zak enthusiastically, ‘And once we had them … we simply fell in love with Robe!” 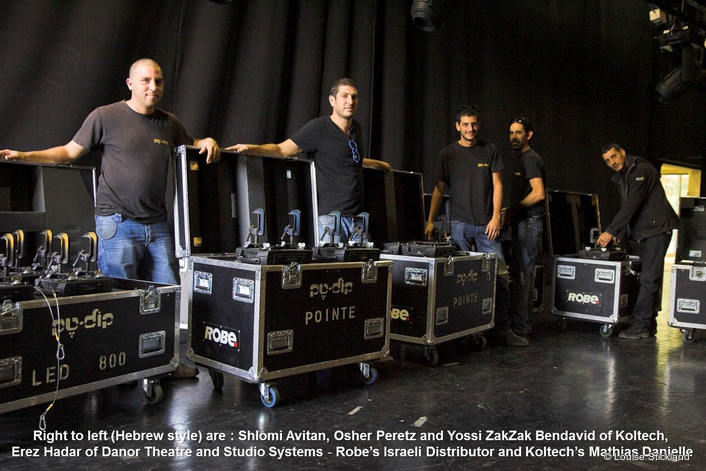 In 2014 the commitment to Robe continued with LEDWash 800s and also LEDBeam 100s.

Zak Zak finds the inbuilt wireless DMX cards very useful and uses this feature a lot on his fixtures. He generally appreciates the brightness, light weight and flexibility of all the luminaires as well as the famous Robe reliability. He also likes the kudos of having a leading European brand – that is genuinely made there - on-board.

This is all backed up by “Excellent” service, after-sales and support available at any time from Danor. “They understand the needs and pressures on customers and always act quickly and efficiently,” he confirms.

Zak Zak has visited the Robe factory in Valmez, with which he’s suitably impressed by the set-up, infrastructure and all the latest production equipment”.

Koltech currently has 13 full time staff and will usually service around 15 – 20 events a month of varying sizes and complexities which will be all over Israel, but primarily in the south.

Zak Zak is also the company’s main LD, so he designs and programmes many of their projects as well as working internationally for some clients. Recently this work took him to London lighting a dance troupe from Ben Gurion University whose show “Karina” played at the British Library and the London Artsdepot.

He’s been in the industry since he was 15 … and it’s his lifeblood. He originally started as a sound engineer and then moved on to video, lighting and visuals and this is where he has found his real career passion and focus.