Kitting out a Future-Proof OB Van

Sony has built a mammoth 28-camera OB vehicle with four expandable sides for Di Bi Technology
Italian broadcast company Di Bi Technology is the outside broadcast provider for many top-tier Italian football matches as well as high-profile entertainment programmes, including the 2013 Italian version of ‘The X Factor’.

To enable it to provide the highest quality OB services to its disparate client base, it has recently taken delivery of a huge OB truck with four expandable sides that can cope with 28 camera feeds. The vehicle – called DiBi 11 – was designed and built by Sony and has Sony products at the core of its complex operations.

The kit list for Di Bi Technology’s truck reveals the design and implementation of the van has been put together to provide a truly ‘best of breed’ outside broadcast service. Aside from being wired for almost 30 cameras, it’s built around the high-end, 3G ready Sony MVS-8000X switcher and OLED Trimaster EL professional monitors. 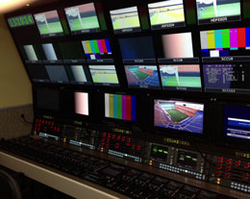 Furthermore, DiBi 11 is supplied with eight HDLA-1505B smart large lens adaptors that make it possible for both the 1700 and 3300 cameras to be very quickly used with a large lens and a large LCD viewfinder.

In keeping with the rest of the vehicle, much of the monitoring inside the van is top-end, with TRIMASTER EL OLED screens –the 17” PMW-1741 A series monitor, as well as the top-of-the-range BVM-F250A reference monitor – used alongside FWD series LED screens.

Extending the distance of digital triax
For covering football matches in stadiums wired with triax, DiBi 11 is equipped with 14 HDTX-200 fibre-to-3G digital triax converters, which convert a fibre signal to digital triax, enabling the transmission of 1080P or two times speed Slow-mo signals (2 x 1080i) over triax. It has the same number of HDTX-200 3G digital triax-to-fibre converters; working together with the HDFX-200, the HDTX-200 extends the digital triax system to distances of up to 3,700m between the camera and camera control unit. 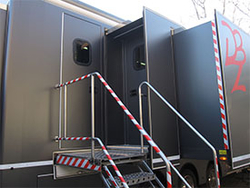 On the road
The vehicle was delivered to Di Bi Technology in September and immediately went out on its first job, covering a football match on the week of delivery. The schedule was so tight the camera heads had to be delivered directly to the stadium to ensure the speedy turnaround from design, build and delivery of DiBi 11 to covering its first OB.

“The whole van works very well for what we need – I’m very happy with it,” says Michele Naldoni, Senior Technical Manager, Di Bi Technology. “We have a lot of commissions, but mainly wanted it for our football coverage and for doing big LE shows. We did a couple of football matches around Europe when we received the truck, and then we moved to the studio for ‘The X Factor’.

Doing live LE shows is different from sporting events – it’s more complicated, with all the on-screen graphics mixing in and out, as well as visual effects, whereas football is mainly just cutting cameras, so technically it’s easier.”

The next job for DiBi 11, following ‘The X Factor’, is the Ski World Championship.

Standardising on a brand
“We need a lot of space inside the van as there are a lot of people to fit inside and a lot of cameras feeding into the vehicle,” adds Naldoni. “We’ve bought 21 cameras for the van and two super slow-mo models. We went for Sony cameras – the HDC-1700s – as we knew the HDC-1500 very well and had a lot of them, and we have the 1550s too. We started with Sony kit and it’s easier and more sensible option for us to go on with them.”

“By standardising on the brand of camera manufacturer we can share cameras with other trucks and they just connect up, slot in and work. Camera control is easier this way too – you know you can buy a product from the same brand and it’ll be familiar to you,” explains Naldoni. “And the 1700 is brilliant, I like the camera a lot.”

The 8000X mixer, though, is a new model for Naldoni, so he’s planning on undertaking some training to get up to speed with it. However, he says, “A lot of our operators and the freelancers we bring in are familiar with it and it has lot of features and DME effects, which we use a lot of in ‘The X Factor’, so it’s well suited to our needs. The most important thing about the 8000X for ‘The X Factor’ is the DME – we film all the artists with a different effect from the DME and they all have glow and film effect, too. Without the MVS mixer’s DME effects, the show would never be the same.”

When it comes to the monitoring in the van, Naldoni says: “The quality of the OLED screens are very, very high – I really like the picture, the images are of a very high quality. The director of ‘The X Factor’ is also very happy with the image clarity of the screens.”

Future proof
DiBi 11 has been built to be as future-proof as possible, and is able to cover 4K outside broadcasts with minor adaptations should the need arise. Naldoni, though, isn’t anticipating any demand for 4K in the immediate future: “The market is not moving very fast to 4K in Italy. We’re ready, we can do it if any customer needs it, but HD is the top quality demand right now. 3D in Italy isn’t very popular, whereas 4K could end up being successful, it’s just not at the moment.”