The Killers Choose ArKaos for the Battle Born World Tour 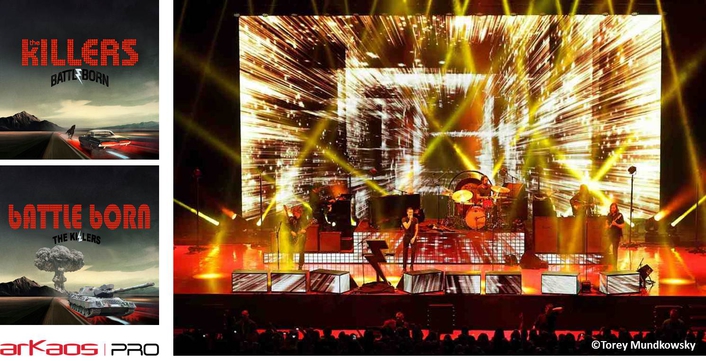 .
The Killers Battle Born tour, which has so far crossed the US, Australia and Europe to promote the band’s fourth album, has taken ArKaos MediaMaster 3 with its new VideoMapper extension along for the ride.Show Designer Steven Douglas has worked with The Killers before and has this time created a spectacular show, making an advanced use of live camera feeds from various sources, mixed with visual content in real time.

Taking advantage of the multi output capabilities of the ArKaos VideoMapper, Douglas has setup an upstage video wall composed of Pixled F-15 NT, which splits into two separate video screens with the top section measuring 4.6m x 14.6m and the lower section 1.8m x 14.6m, revealing a wall of moving lights and lasers behind it.

On stage, Douglas incorporates more video screens into some of the set elements. Three band risers are covered in a total of 618 Barco O-lite 510 tiles on 40 strings, controlled by 12 OMIX control boxes. This gives a total of 102960 active pixels across the band risers.

Even more projection space is installed downstage by eight d&b M2 monitor wedges which are each covered in five Pixled F-11 tiles. These are rotated 90° to ensure a close fit.

No less than ten cameras are dotted all around the stage, their feed is pre-mixed and cut by Chris Isaacson from XL Video using a Grass Valley Kayak switcher, before going through a Thundering Jacks Video Dust system to add some effects.

All the camera feeds are then formatted and output to the various screens via a Vixen Media Server System supplied by ChristieLites and running the latest ArKaos MediaMaster Pro 3 software with the VideoMapper extension. Triggered from Douglas’s grandMA2 light console, the media server also stores and plays back all the visual content through ArKaos MediaMaster Pro.

The Killers started using the ArKaos VJ DMX software back in 2009 for the Day and Age tour,” explains Kapler. “The software proved to be reliable and user friendly throughout the tour so we decided to stick with ArKaos for this album cycle and migrate to the new MediaMaster Pro 3”.

The software was officially released a couple weeks before pre-production in October 2012 and the timing couldn't have been better! We were looking for a solution to mapping out all our set elements and VideoMapper was the best option for this. “

"The F-11 panels in the wedge covers had to be rotated 90° to fit, which was our first challenge, but thankfully VideoMapper made it easy to rotate the output. The VideoMapper has been a huge help in giving us the flexibility to program the output of a layer anywhere onto multiple surfaces.”

The Killers tour set out in September 2012 and is scheduled at the moment to finish in September 2013 after taking in more dates across Europe, Latin America and North America.

About ArKaos Pro
ArKaos Pro is a division with ArKaos - leading provider of real-time visual processingtechnologies for live visual performances. Founded in 1996, ArKaos has been a pioneer in interactive video technologies since the emergence of VJing to todays wide spread use of LED and projection technologies. ArKaos provides both software products and media servers that deliver an unrivalled performance in speed, effects and manipulation of simultaneous high-definition videostreams.