Bringing together manufacturers, broadcasters, advertisers, ad agencies, and industry organizations (standards bodies and trade associations) serving the professional media market, the Task Force has an ultimate goal to create greater efficiencies and cost savings for exchange of file-based content. The group's initial focus will be to gather and analyze requirements for a machine-generated and readable file interchange and delivery specification — including standardized and common structured metadata — for the professional media industry. Use case examples include promo, spot, and program delivery from a provider to a broadcaster. 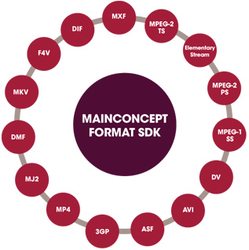 "We believe that, by improving the specification and exchange of professional media between organizations, we can enable new and more efficient file-based workflows," said Clyde Smith, senior vice president of new technology, Fox Network and a member of the NABA technical committee that initiated creation of the joint task force. "The task force represents a diverse group of sponsor organizations with an extensive global reach, and together we will gather and analyze information not only about user requirements, but also about current standards and specifications. With this information we can rationalize the complexity of the current media landscape and make useful process and technology recommendations that improve workflow interoperability while reducing the attendant costs of file-based operations," he added.

In one of its initial actions, the task force has published a survey designed to collect data on user requirements. Open to any member of the media industry, the survey asks participants to create a one-sentence "user story" by identifying the nature of their work, the specific function they seek, and the business value that would be provided by that function.
"The work of this task force is critical to eliminate costly, time-consuming steps and to adopt new automated processes in the media and entertainment supply chain. Together, the work advances, efficient operations, and interoperability create the foundation for improved audience measurement," said Bob Liodice, president and CEO of the ANA.
Other task force activities will include the collection of data on existing products for transcode, transform, and file QC, and their ability to be driven by data from UML, XML, API, script, and other machine-to-machine communication mechanisms. In addition to analyzing and publishing this data within a formal report, the task force will analyze the data in terms of current, planned, and unplanned standards activities and publish recommendations for future activities.

About the Society of Motion Picture and Television Engineers
The Oscar® and Emmy® Award-winning Society of Motion Picture and Television Engineers (SMPTE), a professional membership association, is the worldwide leader in developing and providing motion-imaging standards and education for the communications, technology, media, and entertainment industries. An internationally recognized and accredited organization, SMPTE advances moving-imagery education and engineering across the broadband, broadcast, cinema, and IT disciplines. Since its founding in 1916, SMPTE has published the SMPTE Motion Imaging Journal and developed more than 650 standards, recommended practices, and engineering guidelines. More than 6,000 members — motion-imaging executives, engineers, creative and technology professionals, researchers, scientists, educators, and students — who meet in Sections throughout the world sustain the Society.

About the IABM
The IABM, the International Association of Broadcasting Manufacturers, is the authoritative voice of the broadcast and media technology supply industry worldwide. Its wide range of services to members encompasses market research and intelligence, training, expert representation at standards bodies and broadcasting unions, executive networking opportunities, and preferential purchasing. A presence at every major broadcast tradeshow, the IABM also provides a valuable channel for communication among broadcast manufacturers, government, and regulatory bodies. Additional IABM activities include awards programs for innovation and scholarships designed to stimulate the development of the broadcast and electronic media industries on an international basis.

About the 4A's
The 4A's is the national trade association of the advertising agency business. Its membership comprises virtually all of the large, multinational agencies and hundreds of small and mid-sized agencies from across the country. The 1,200 member-agency offices served by the 4A's employ 65,000 people, offer a wide range of marketing communications services, and place 80 percent of all national advertising. The management-oriented association, founded in 1917, helps its members build their businesses and acts as the industry's spokesperson with government, media, and the public sector.

About the ANA
The ANA (Association of National Advertisers) provides leadership that advances marketing excellence and shapes the future of the industry. Founded in 1910, the ANA's membership includes more than 565 companies with 10,000 brands that collectively spend over $250 billion in marketing and advertising. The ANA pursues "collaborative mastery" that advances the interests of marketers and promotes and protects the well-being of the marketing community.

About the European Broadcasting Union (EBU)
The EBU is the world's foremost alliance of public service media organizations, with members in 56 countries in Europe and beyond.
The EBU's mission is to defend the interests of public service media and to promote their indispensable contribution to modern society. It is the point of reference for industry knowledge and expertise. The EBU operates EUROVISION and EURORADIO.
EUROVISION is the media industry's premier distributor and producer of top-quality live sport and news, as well as entertainment, culture, and music content.
EURORADIO enhances public service radio through the exchange of music, professional networking, and the promotion of digital and hybrid radio — to ensure radio remains a key protagonist in a multimedia world.
The EUROVISION/EURORADIO satellite and fibre network is the largest and most reliable in the world, directly plugged in to public service media everywhere.