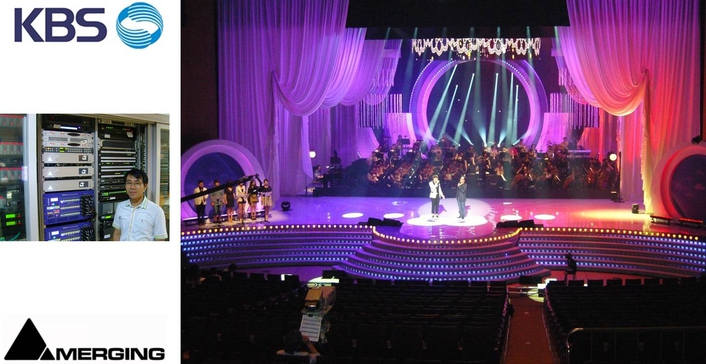 Horus and Pyramix feature in main concert hall upgrade
South Korea’s leading public service broadcaster has upgraded their existing Pyramix installation in the KBS Hall.  The 1661 seater hall is located in the main KBS complex at Yeouido to the South West of Seoul.  The hall hosts not only prestigious music events but is the location for major awards ceremonies throughout the year.

The hall’s recording facilities have traditionally been based around an SSL 9000 K super analog console and the quality of the audio conversion has been an important factor.  The installation of the three Horus units is the result of extensive testing by Ko Moon Ahn and Lee Dong Hoon; the main engineering team from the hall.  As is often the case, the workflow pattern is gradually changing to doing more of the mixdowns in Pyramix. “We really appreciate the improvements in A/D and D/A conversion with Horus. This combined with Pyramix is the ideal solution for the recordings we make in the KBS Hall.”, commented Ko Moon Ahn.

KBS is the major broadcaster for South Korea and started radio broadcasting back in 1927 with television joining in 1961. There are now 3 television channels, 7 radio and 4 DMB services plus local and international stations. The Merging equipment was supplied by Syncfish who are the Merging Technologies’ distributor for South Korea and supply a variety of audio equipment to KBS.

Merging Technologies SA is a Swiss manufacturer with over 20 years of experience in developing groundbreaking, professional Audio and Video products for a wide range of entertainment and media industries. With a dedicated user base in the elite end of the music, film, television, mastering and performances industries, Merging Technologies is committed to developing product ranges with unrivalled quality and flexibility, no matter what the application. Merging builds tools for people who want more from their systems, have an inherent need to push boundaries, and believe that quality always comes first, every time.