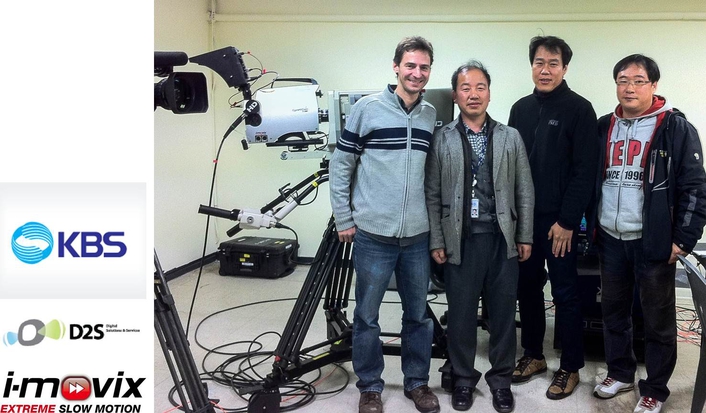 KBS has been a long-term user of ultra motion for sports productions, but this is the first time the broadcaster purchased the I-MOVIX’s solution. KBS trialled three super slowmo systems during the summer of 2012 to compare performance and features.

“During those benchmark trials, we were deeply impressed by I-MOVIX SprintCam Vvs HD,” said Mr. Hwang Sutaek, Director of outside broadcasting department of KBS. “In fact, our basic requirement was reliable image quality in relatively high frame rates – at least 1000fps; but SprintCam Vvs HD also delivered the best set of features and usability, which is why we chose SprintCam Vvs HD over the others. Now, we are looking forward to the upcoming development of new products from I-MOVIX like the deflickering system.”

The SprintCam Vvs HD broadcast system already has achieved unprecedented success in sports production because of its unique combination of image quality, light sensitivity, flexible broadcast integration, and easy, out-of-the-box operation. The system, delivering from 25 to 2,600 fps in 1080i or up to 5,600 fps in 720p, with instant replay, comprises the latest generation Vision Research high-speed HD camera; an operational control panel that provides a real broadcast-quality color matrix and control of frame-rate choice; a slow-motion remote that allows the user to select a video sequence and instantly replay it with an HD-SDI output for live broadcast or storage on any EVS server for a later use; and the camera control unit, which provides control of the slow-motion instant replay, camera control, and data interface between the camera and the EVS server.

“With this camera KBS will be able to provide a differentiated service and enhance viewer ratings,” said Bruce Kim, Director of P2 Department, D2S. “Our team supported the broadcaster through the lengthy benchmarking process and we are glad to be continuing our contribution to high-quality production at KBS.”

About KBS
Korean Broadcasting System is Korea’s leading public services broadcaster and the most influential media organization in the country. KBS regards it a core duty to reflect the diverse voices of Korea through the distinctiveness of its programs. KBS is run by both license fee and income from the advertisements to operate its three TV, seven radio and four DMB channels. KBS began the country’s first radio broadcasting service back in 1927 and commenced Korea’s first television broadcasting in 1961. KBS has also been broadcasting HD programs since 2001 and by 2012 all of its programs will be produced and broadcast in HD. The world’s first terrestrial DMB service was launched by KBS on 1 December 2005 and offers television, audio and data services. For the audiences in Asia and other parts of the world, KBS has gained international recognition for the quality and range of its programs. KBS World TV, the international satellite channel which was launched in 2003, provides high quality content of KBS. The programs are transmitted to Europe, Middle East, North Africa, America and to most of Asian regions. KBS World Radio, with 56 years of history, offers 11 different language services to listeners worldwide.

About I-MOVIX
I-MOVIX is a Belgian company with market-leading technology in the domain of extreme slow motion (from 75 to over 5,000 FPS). The company’s products are the first true ultra-slow motion systems, fully integrated for broadcast use, offering the unprecedented combination of very high frame rates and instant replay, or continuous streaming. The technology has applications in live sports and other live TV productions, as well as in commercials, documentaries, feature films, and scientific R&D.