Omneon Spectrum and MediaGrid at 7 Channel
Omneon, Inc. today announced that Kazakhstan's 7 Channel, a new national channel based in Astana, is using an Omneon media storage and processing platform to support a highly automated tapeless news production workflow. Representing one of the first applications of tapeless broadcast technologies in Kazakhstan, the deployment of the Omneon MediaGrid(TM) active storage system and the Omneon Spectrum(TM) media server systems allows 7 Channel to realize fast, reliable processing of media in a flexible model for news production and playout.

"We considered a number of alternatives and chose to build our operations on the Omneon platform because of its unique modular design, scalability, processing speed, and functional reliability in supporting a cost-effective tapeless workflow," said Sergey Stebnevskiy, technical director at 7 Channel. "Omneon customer support proved to be very professional and responsive, making it easy for us to integrate modern tapeless technologies into a highly efficient news production system." 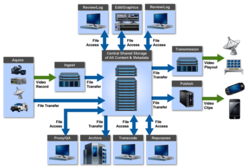 7 Channel has installed its new Omneon MediaGrid system to provide centralized storage for all divisions of the facility, including the newsroom, archive, post-production, and air control room. As 7 Channel continues to refine its operations, the new broadcaster will integrate the Omneon MediaGrid with Adobe(R) Premiere(R) Pro systems to enable edit-in-place functionality. This capability promises not only to streamline the production workflow, but also to reduce costs associated with tape and VTR purchases, maintenance, and repair.

"7 Channel's adoption of the Omneon media storage and processing is a significant step forward for broadcast technology in Kazakhstan and a notable example of the growing adoption of the Omneon MediaGrid system across the global broadcast market," said Geoff Stedman, senior vice president of marketing and business development at Omneon. "As broadcasters such as 7 Channel seek to capitalize on the potential of true file-based workflows, they're finding the Omneon platform to be a flexible solution that provides a critical balance of power, performance, reliability, and interoperability."

Based in Astana, 7 Channel is a new national channel serving Kazakhstan as a whole. Program offerings on 7 Channel include news, talk shows, and movies.

Omneon, Inc. is a leading provider of scalable media server and active storage systems that optimize workflow productivity and on-air reliability for the production, distribution, and management of digital media. Omneon is a pioneer in the use of advanced IT technologies and open systems for broadcast applications, producing a modular and expandable video server architecture in the Omneon Spectrum media server. The company's Omneon MediaGrid active storage system delivers centralized content storage that is scalable in capacity, bandwidth, and media-processing power. The company has an extensive global presence with customers in more than 50 countries on six continents. Omneon is on the Web at